I've snuck out to deal with emails and bills.  Things have slowed down a bit in the last day or two, which has been a nice break.  We are at over 200 calves now, and we have had SEVEN sets of twins!  Three sets over two days is a bit much! 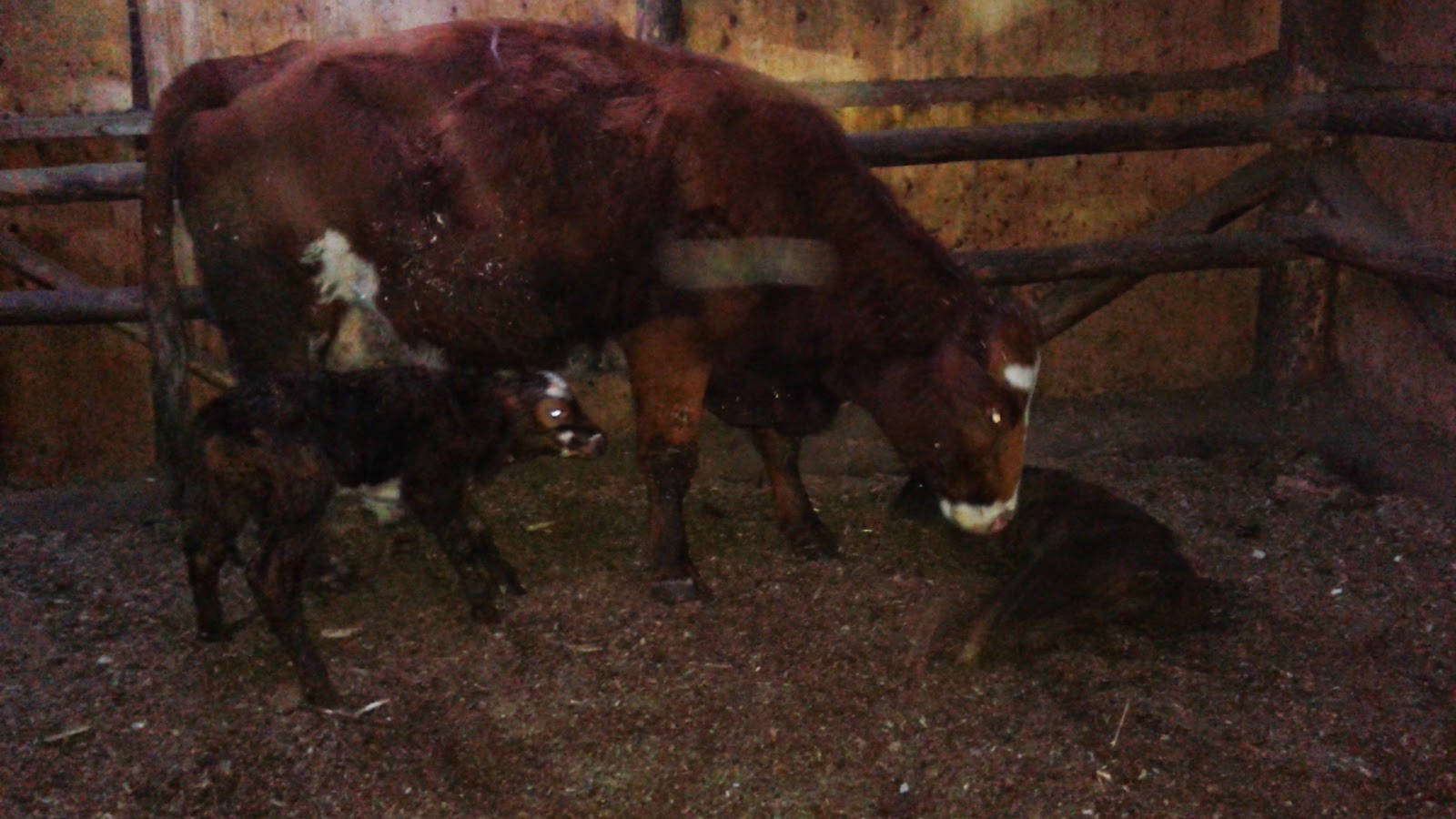 Seriously, anyone looking to sell a milk cow?!  Black Velvet the Holstein and Jessica the Jersey are feeding two babies each already! 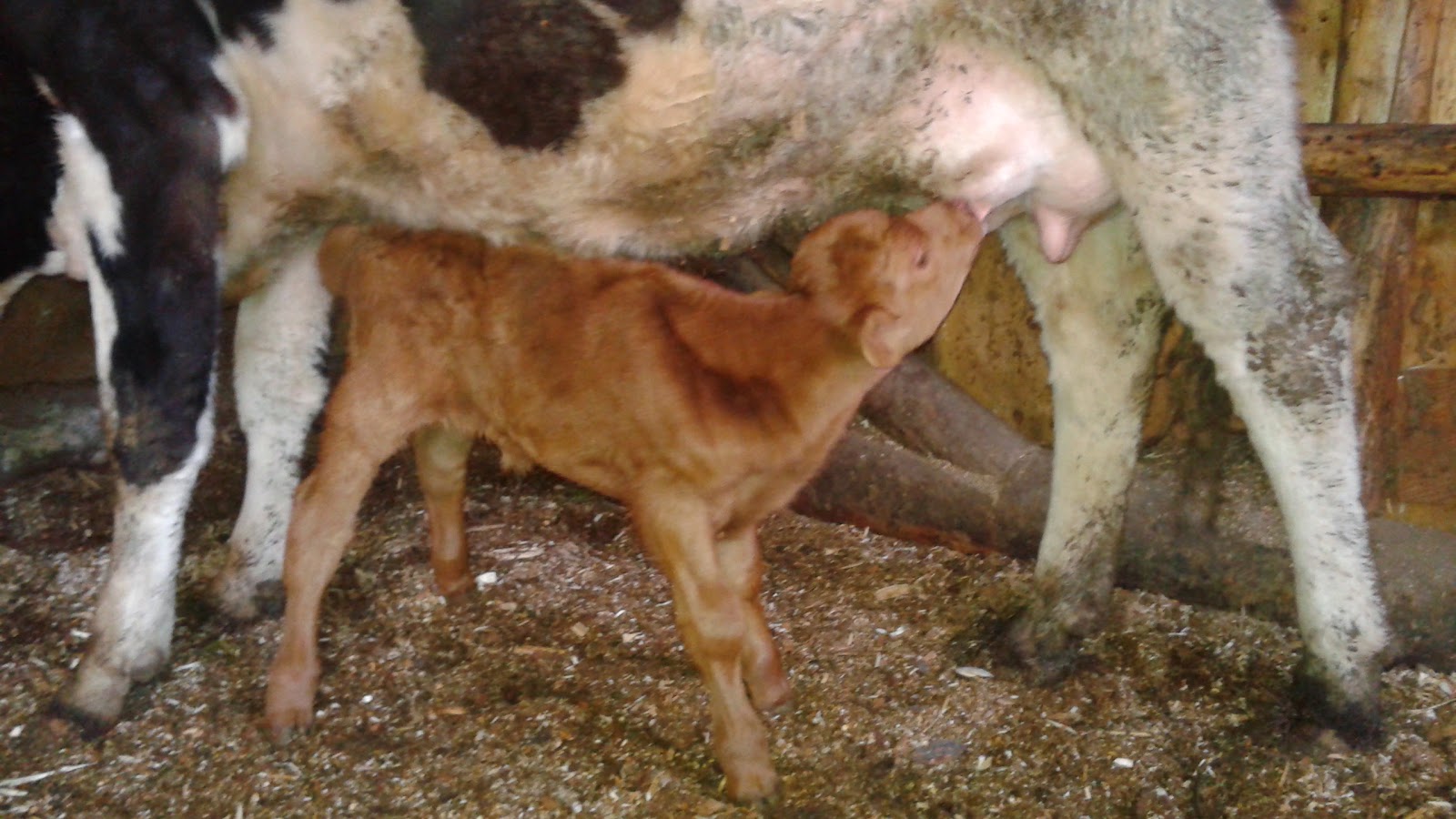 This is 'Itsy Bitsy Betsy' nursing from directly under Black Velvet....she can't weigh much over 20 pounds.  But she is strong and determined and growing well. 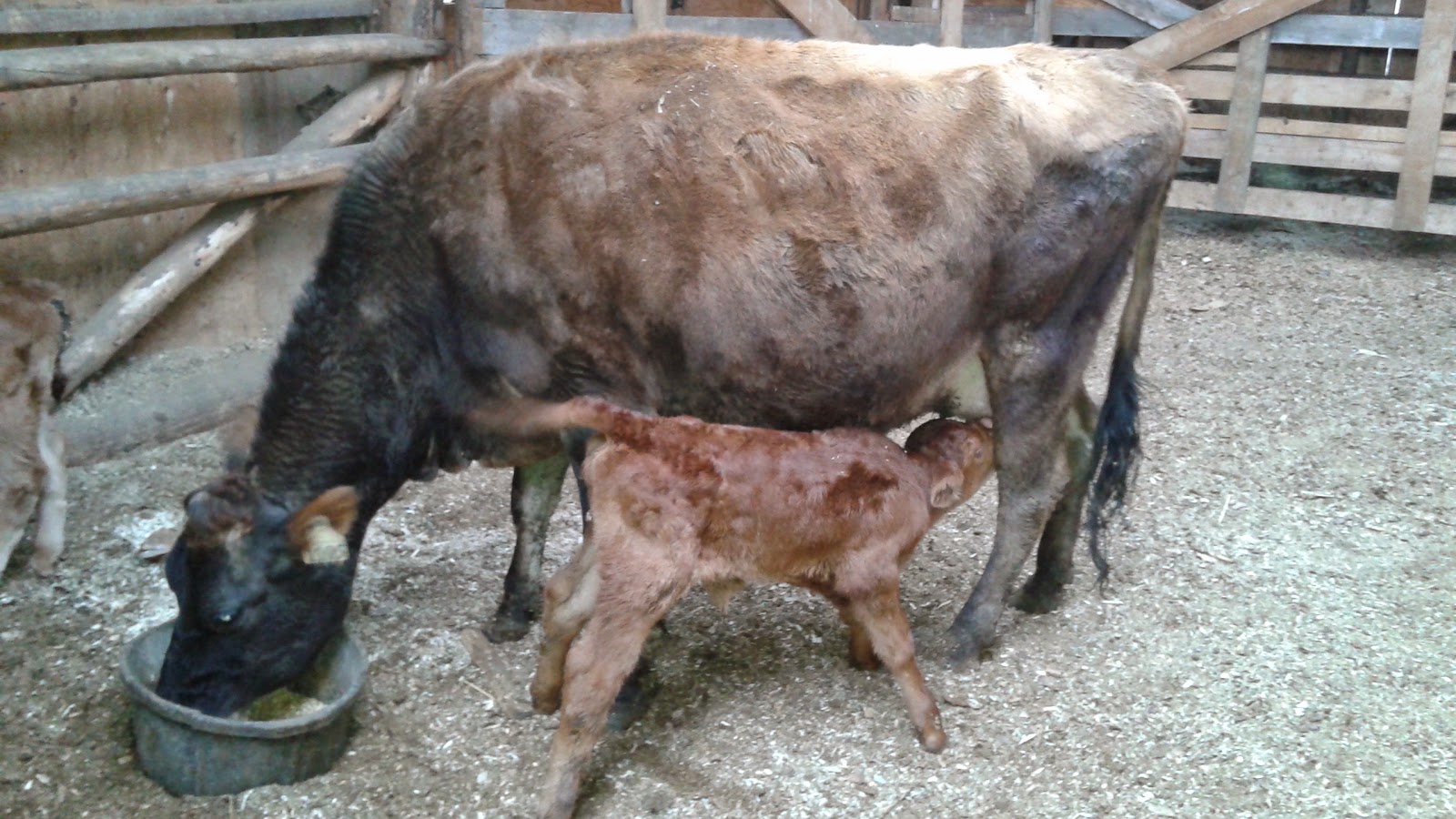 Tails get wagging when that yummy milk starts flowing!  The unwilling foster mom, Jessica, with one of her babies.
It is not nearly so vital this year (so far) as the weather has been amazingly cooperative, but someone still stumbles through the pens every 2 hours.   To keep things straight, we all write in a book to let the next one know what to look for.  It can get fairly entertaining sometimes, but is really quite important. 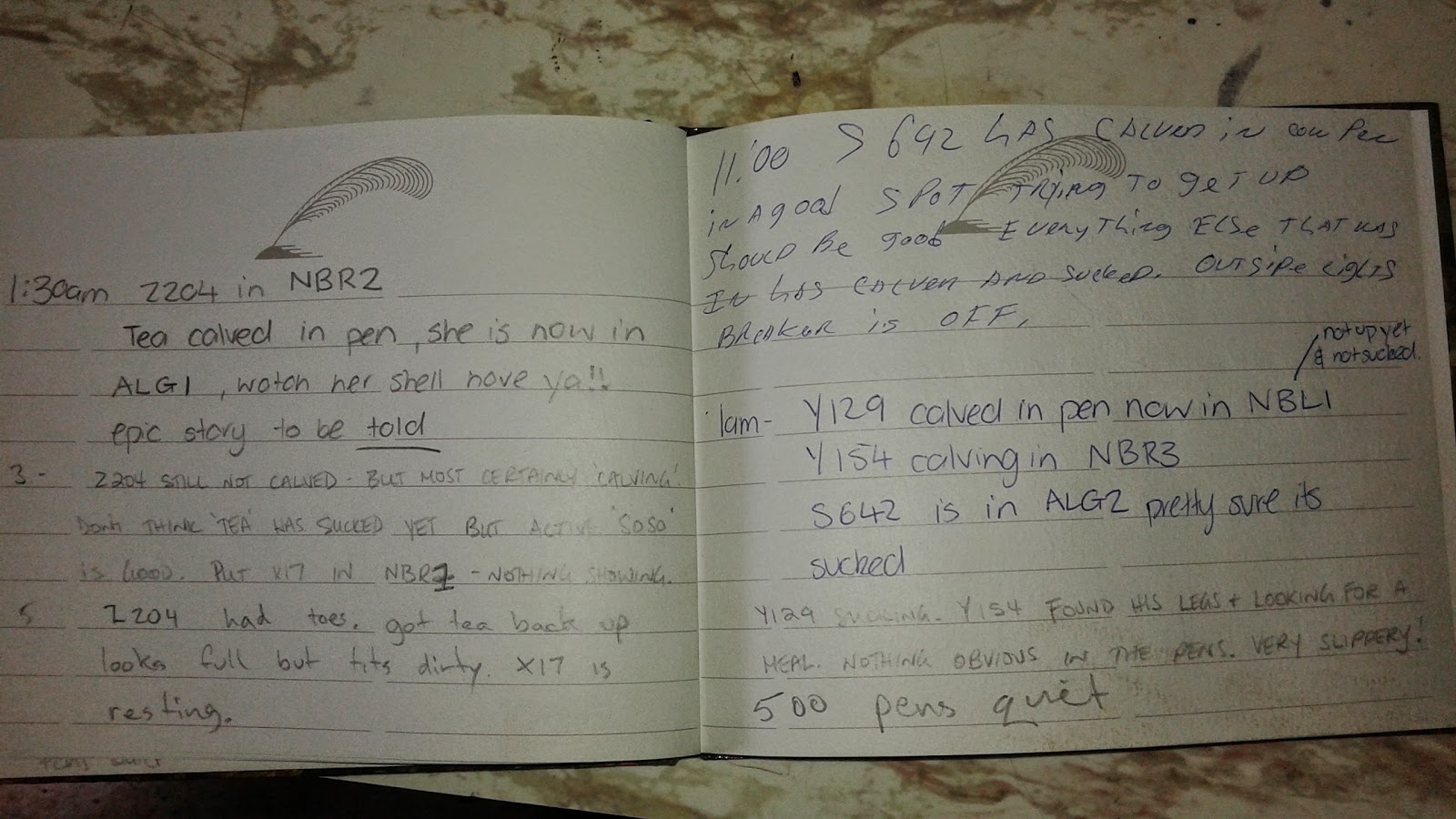 I've mentioned about having the same number/name tag in the calves as what the cows has.  That keeps things very simple.  We are also required to have a RFID (radio frequency identification) button in the calves (or any animal leaving the ranch.)  They cannot be sold without this button as it identifies where the animal originated.  While it is a good idea to identify the cattle this way, the button system is far from fool proof.  They get ripped out as easily as the name tags and are really quite expensive.  Each button costs about $3.35, depending on the number you purchase at a time.  The name/number tags are about $1.40 each.
Every morning we enter the newest numbers into the calving book (from the day previous and the night) and make up tags.  In the calving book you can see the last 3 digits of the RFID buttons, the date, the sex, the mommas number and the location.  (We use two barns and a series of pens so it is super important to record exactly who is where until they get those tags!)  Any problems are also recorded, such as if we had to pull the calf or if the mom is cranky!  Twins are identified with a line under their number on the tag. 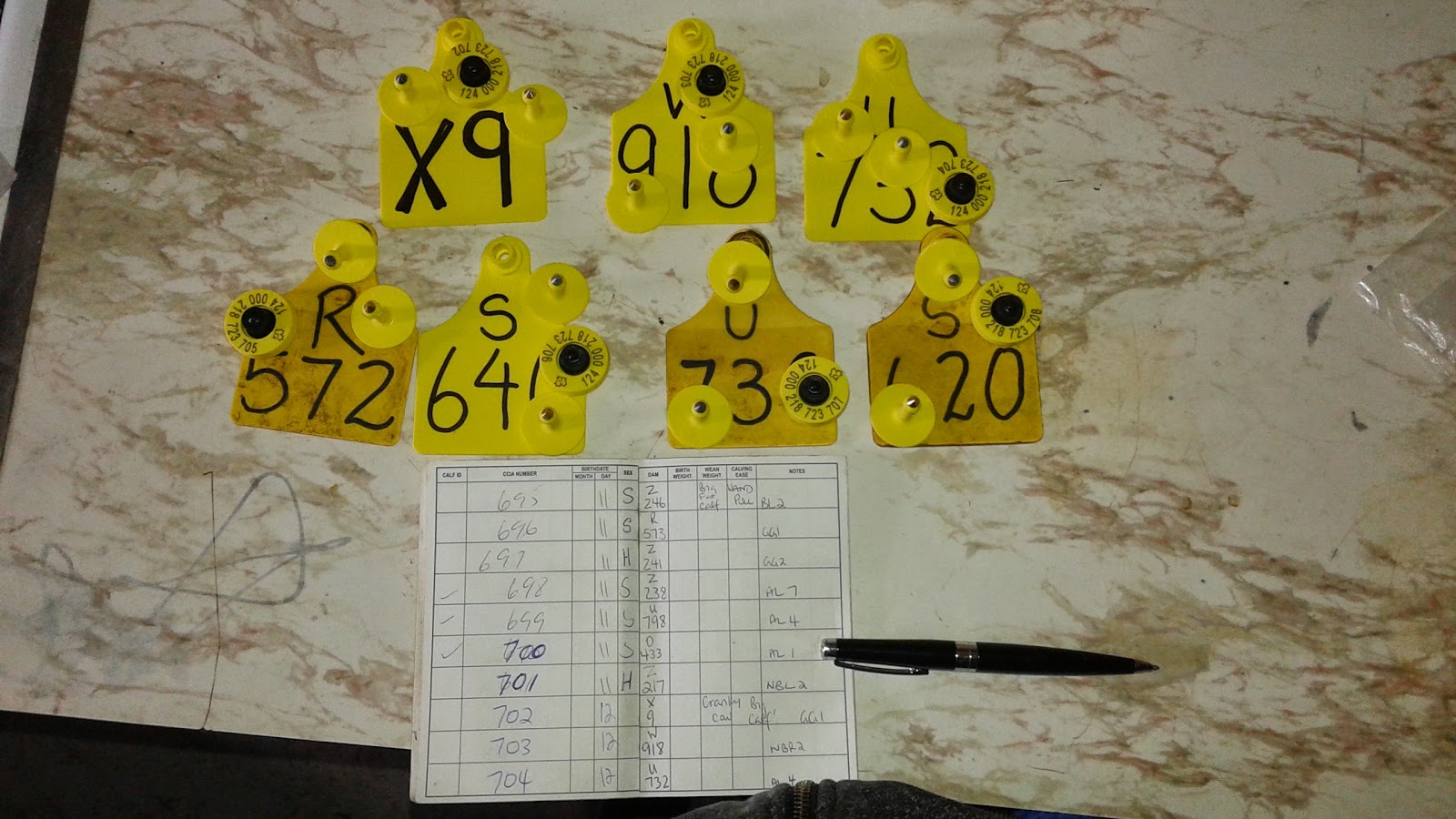 When we are positive that the calf is vigorous and healthy and an aggressive nurser, they get their tags and their vitamin shot while momma is out having breakfast.  Data is then eventually organized into a computer program. 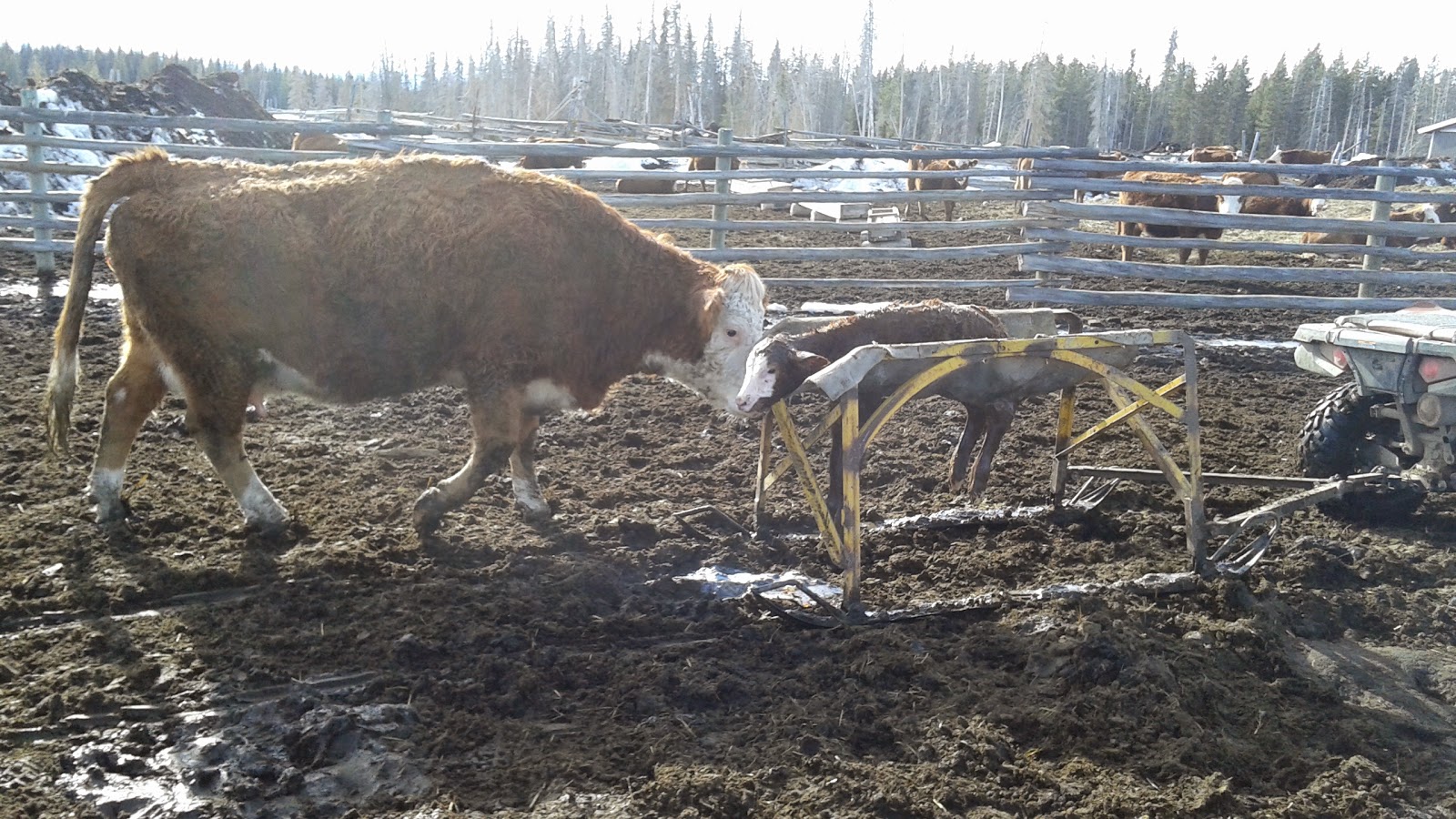 Here is a picture of the calf sleigh I mentioned last time.  Works awesome and you can see momma is following along very well.

If calves are born in the pens, we sometimes bring them in by hand with a big plastic kids sleigh (when there is ice and snow to pull it on) .  If I know the cow is nice enough (most of ours are), it is my usual method in the middle of the night.  It is quicker and easier to flip them in to the plastic sleigh rather than get completely slimed  as I lift and fling us both up in to the quad sleigh, and they  pretty much ALWAYS follow it.   I have to admit though, that even with the gentlest of cows, it can get pretty exciting.  Often they  get right fired up at the sliding black beast making off with their baby and you really have to run to keep ahead of them.  If you have never heard a cow roaring her confusion and concern and anger, I really can't describe it except to say its an exceptionally loud experience and certainly puts wings on your feet (maybe that is why it is quicker!)  The excitement is usually compounded by the calf trying and sometimes succeeding in flopping out and occasionally the mother actually stepping on the sleigh, which brings the whole operation to sudden and jarring halt for just a split second before you shoot off again.  It may make you quick, but all that adrenaline does sometimes make it hard to get back to sleep!
Really, it's probably best to just get the quad and deal with the messy coveralls, jacket and gloves.
Even better lately, with our warm weather, we just leave them for the night and deal with them in the morning and they usually walk out of the pen themselves.
On that note, I'd better head back up to help deal with all the darn twins....