Rounded up and Shipped Out 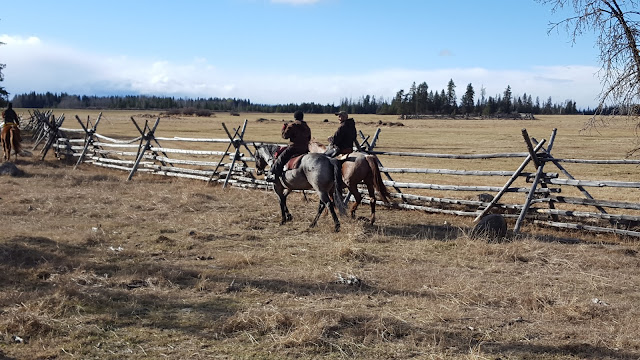 Two of my favorite cowboys, Jackson and Cody.

Well, we've ended up doing fairly well with our roundup of the herd.  We are currently missing 14 pairs and hopefully most of those will still show up.  And hopefully they are still "pairs", meaning momma with baby at side.  We are now able to look at numbers a bit closer and seems we got hit harder than we'd like or expect.  Too many calves did not come in with momma.

Anyhow, the sorting and shipping out went well too.  Our great friend Cheryl (a retired rancher from the area) came out to help and she brings a world of experience, an incredible eye for cattle and her hilarious sense of unfiltered humor.  Everyone grinned when we heard she was making the journey out and she kept us all on our toes, as per normal. 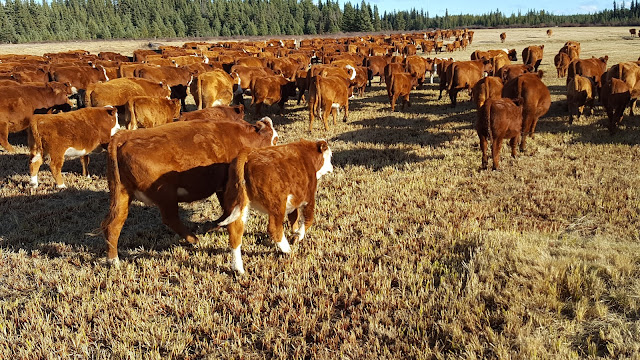 So the process starts with sorting the calves from the cows.  Easy enough.  We have a long alleyway and sort two ways.  The cows go one way, and the calves another.  I generally work the opposite end of the alley, keeping cows pushed forward for the main sorters and leaving calves behind me.  I never really get any photos sorting.  It doesn't make any sense to do so, as there is nothing much to see.   I should sit on the fence one day and take some video.  A good sorter moves very quietly and hardly appears to be doing anything at all.  Once you learn to watch though, you'll see a thousand tiny moves.  Blocking one cow with a shoulder and allowing another to move by with a twist of the hips, stepping forward to push a cow past and gently backing up to draw another one forward.  It is a quiet, constant slow dance.  We generally do carry a 'stick', but it is used as an extension of your arm, not as a weapon.  And  certainly sometimes the moves have to be quick, (got to block that cranky and determined old gal!)  but generally it is hard to tell the person is doing much at all.  Until you try it yourself, or watch an inexperienced sorter. 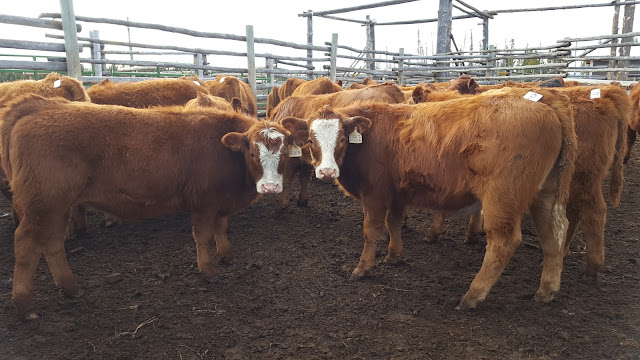 You'll notice the white tags on the rump of some of these.  This keeps ownership organized when they get to the stock yards.

So then we have to 'sex' them, steers from heifers.  That can take a bit more time but with Cheryl as an extra hand, it went very quickly.  Next we go through the steers and pick out anything that doesn't fit in the group or should not go for whatever.  For example, if one is too small, or lame etc.   We put a white tag on the rumps of the calves belonging to Eli and I and then start loading.  Our calves are tagged as they are all sold together (with mum and dad's)  and this keeps straight who needs to be paid for what.  Easier if we can do it at home, keeps the yard crew happy in Williams Lake. 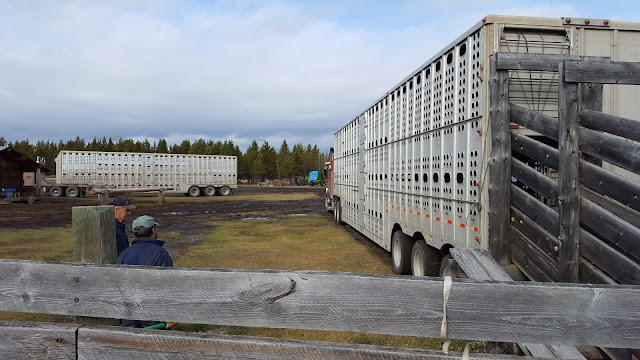 By that time, the big trucks are usually pulling up.  As the guys are loading the first groups of steers, us gals are usually in the back, sorting heifers.  We go through and hold back the nicest ones for potential replacement, looking at all aspects and trying to remember the details of the mother as well, if possible.  As Eli and I have a smaller herd, I can always remember the cranky mommas, and try to never keep their calves.  Doesn't always work that way, but most times.  Of course we also hold back anything that might be lame, or too small etc.  (These 'misfits' come down to Five Mile for special treatment.  Without having to wrestle for their meals (as they would in the pen of bigger heifers) and with good shelter and grain, they grow up fine.  They are generally pasture raised over the summer and sent to market in early fall of the next year. 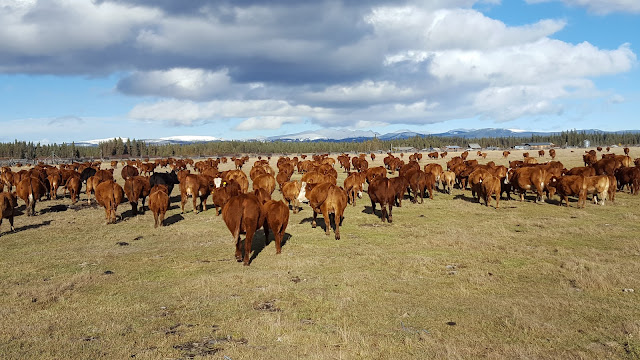 Gathering at Five Mile, snowy Itcha mountains in the background.

As you can guess, it is a busy morning.  We started with the alleyway lights before daylight and all the trucks were loaded and away by 1:30. 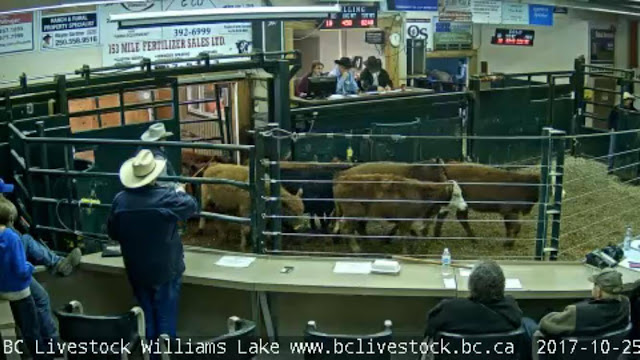 Magalie took this photo as she watched our sale via the computer.  You can just see Eli's foot and hat and Jackson to the far left of the picture.

Alright folks, that's it for tonight.
I look forward to telling you more soon.
Make it a good day and don't forget to hug and appreciate your loved ones.
Punky 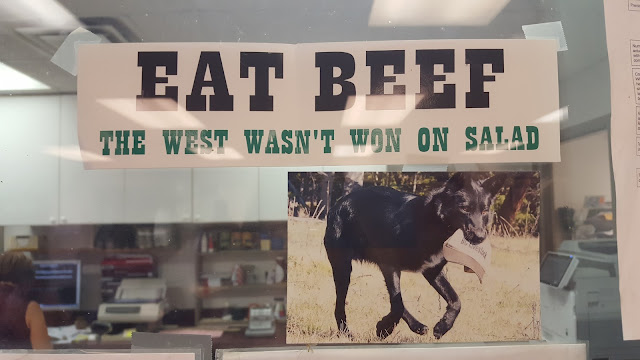 This sign at the stockyards in Williams Lake made me chuckle.

Makes me laugh too!