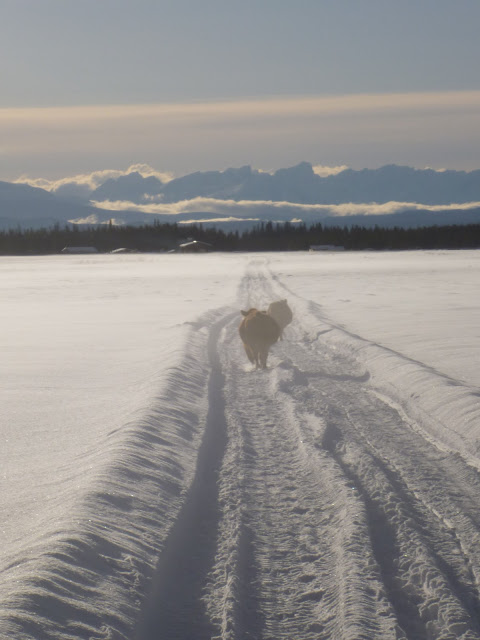 Greetings all!
I wrote this post some time ago but thought I would share tonight.  We are busy at the moment with calving preparation. It also happens to be 'end of term' for Jackson, so finishing up his assignments and getting everything handed in is a priority as well.  We are doing a video slideshow for much of it, and it has turned in to a lot of work (of course.)  Seemed like a good idea at the time......
Anyhow, I thought I'd add a few photos to this post while I'm waiting for the slideshow videos to upload, or download, or whatever needs to happen.... 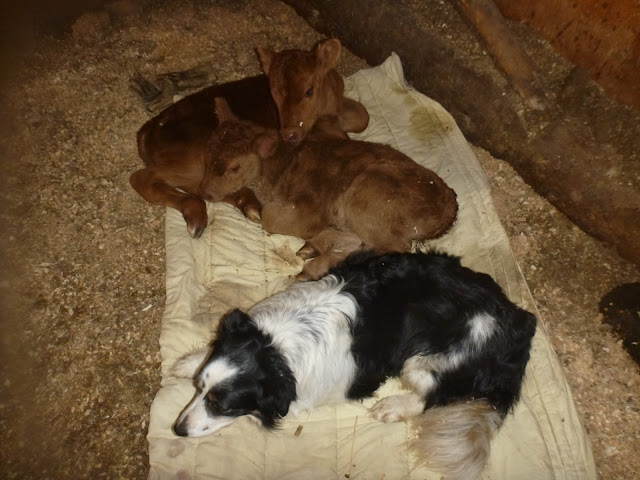 I came across some older photos recently and they are fun to share.  On the top you see my dog Ting compared to a set of little wee twins.  Ting is not a big dog and she absolutely outweighed them.  If memory serves me, the smallest was 18 lbs.  But totally healthy! 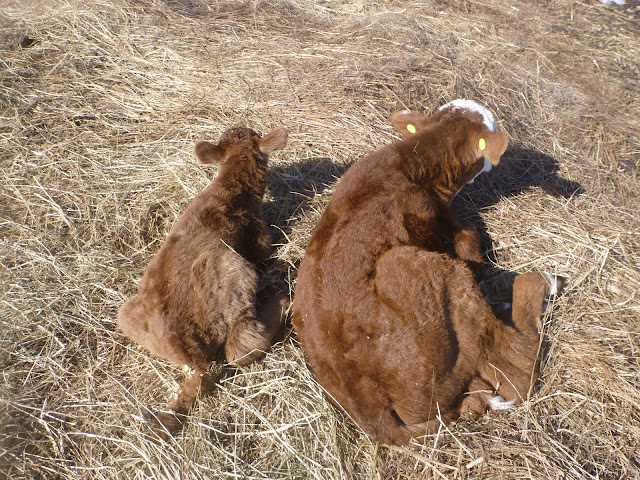 As it happened, we had an abnormally large calf around the same time.  Here they lie, side by each. 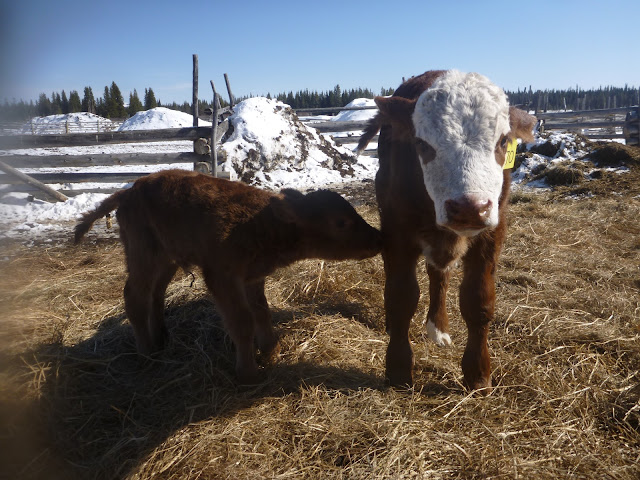 Might think this was momma and baby......instead of the smallest and largest calf of the year.

I've been asked a few times, and not sure I've answered properly, about why we seem to move our cattle so often.  It's a valid question.  Basically, it comes down to food.  In the summer time, we are constantly monitoring the cows to make sure they are not overgrazing any particular area, and that the bulls are present to do their job.  There is really a lot of feed out here and cattle tend to either a) really scatter or b) really concentrate on their favorite areas.   There are other factors that come into play as well, but good management means being in close contact as often and consistently as possible.

Our range is very large, with a huge diversity in altitude and environment.  Not only are we mindful of the dates and restrictions provided to us by the government, but we must have a larger picture in mind and use our environment to the best advantage.  For example, it is best to utilize the farthest away grass during the summer as it is very risky to push cattle too far away in the fall.  One never knows when or if Mother Nature will unleash record cold temperatures or allow multiple feet of snow to fall at once.  If that happens (and it does!), it is difficult enough to gather cows that are within a couple of miles of home.  It would be impossible if they were scattered 15 or 20 miles away, especially up in the higher altitudes.  So while it may seem handier to have the cattle closer to the ranch in the summer,  they will obviously eat up all the forage available and you best have a big stack of hay available come fall!  It also helps that, in the fall and winter, our big swamps freeze over and feed that the cattle cannot access in the spring and summer becomes available.  So we move them, and watch them.  Or try.  It's big country and much of it is not that friendly. 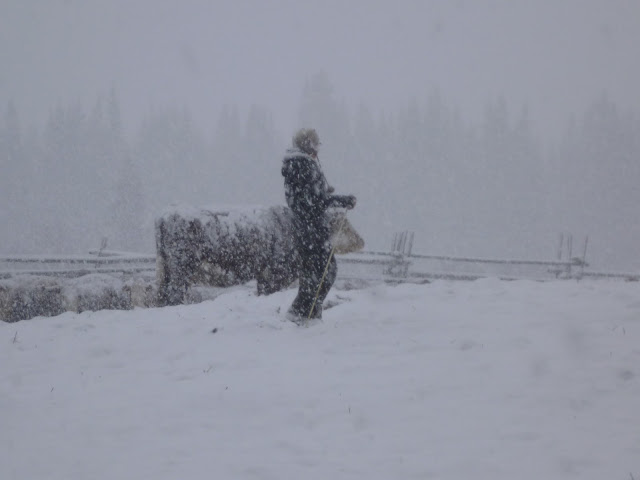 Now in the winter, when the cattle are all home, we are moving them for a similar reason, although not such great distances.
I mentioned earlier that we have several ranch sites.  Of course these ranch sites are where the hay is.  And where the hay is, is where the cattle need to be.  Again, we have to think about the big picture, making sure how we are feeding makes sense.

So, for example, we had a large amount of cattle at Three Circle earlier.  They were left there long enough to be fed all of the lesser quality hay (got rained on) as right now they need to maintain and the hay is plenty good for that.  Once that lesser hay was used up, we moved them again as we will need the remaining "good" hay there later in the year.  Now they need to maintain..... later in the Spring they need the best quality we have as it takes a lot of energy to grow that baby in the final stages, produce the essential high quality colostrum, calve out, milk well and raise a healthy baby. 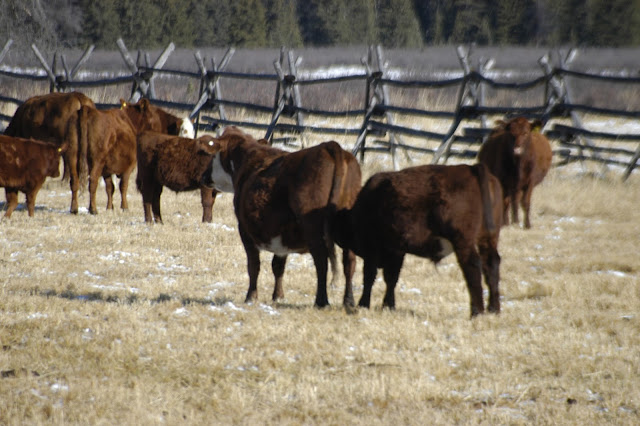 From Three Circle we took the majority of our mature cows up to a remote meadow that we have a couple hundred bales put up on.    It is a real pain to do the feeding up there, but it makes more sense to take the cows to the hay, rather than haul it all out over a long rough track.  (About a 1 1/2 hour tractor ride one way.)  We took them up there in two groups as there were too many to handle if they decided they didn't want to go.  It is rough, brushy country and not easy to get around in if things get tough.  Luckily, both groups traveled well, but it meant two very cold days in the saddle, rather than one.  We brought them all home (in one group) and finally everyone was settled at Five Mile for the remainder of the winter.

As the time gets closer for calving (first of March), almost all of them will be moved to Six Mile where our main facilities are.  (And lots of excellent quality hay.)

Oh, and to top it off, we always keep the first and second calvers separate.  The young cows are still growing and do best with extra care and attention.  They always get the highest quality feed and plenty of it.  Really, they are kept pretty much separate (for calving and then with their new babies, on range and with specific bulls) until they are of the age to have their third calf.  Then, while still young, they are considered 'mature' and go into the main herd. 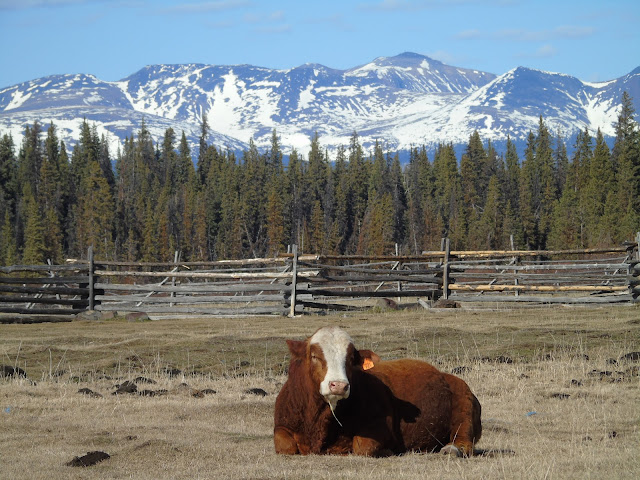