This is from a newspaper article I found, written about my grandfather.  It has been photocopied and was obviously well used before the copying.  I'm re-writing from 'between the the wrinkles' a bit, so any mistakes are mine and I apologize.


Although he lived in obscurity Lester was larger than life 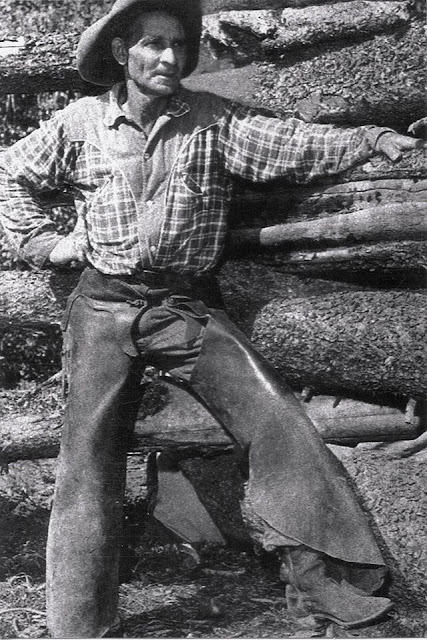 -Paul St. Pierre....former Sun columnist and member of Parliament for Coast-Chilcotin, now a member of the B.C Police Commission

Saturday afternoon around two o'clock, Lester Dorsey will finally keep an appointment on time.  He will be buried in the Anahim cemetery.

He will be cast into that pale brown rocky ground beside his wife, Mickey, who was buried just a month ago.  She was the sixth and he will be the seventh white buried there.  It is yet now country.  Until the day before yesterday, it was frontier.

We are lucky, those of us who were privileged to know such people - Lester, Mickey, Rich Hobson - who wrote Grass Beyond the Mountains and died - and Pan Phillips, who is among the last of the old originals, and lives.

These people were obscure.  They lived an obscure life in a small and inconsequential place.  As chance will have it, for reasons you and I will never know, they were also great people.  They were larger than life.  Heroic is the word.

Of Mickey, the wife, it is perhaps too late to speak adequately, except to say that she was the most heroic of them all, because she was a ranch wife.  Ranch wives have to be observed to be believed.  They are the greatest and the most unnoticed of all the great Canadians.

I find it easier to write of Lester.  He was male and foolish, like me.

So his funeral on that dusty little sidehill next to the stampede grounds at Anahim Lake will be a huge affair, by the standards of that sparsely settled land.  Big men of high reputation in this world will be there, and so will raggedy-ass small ranchers, who dwell on the fringes of the settled world, men who have worked as hard as Lester did but who were less noticeable because they lacked a certain magic.  Lester had the magic.  What was the magic?  I'm not sure.

To know Lester was to constantly amazed by his fortitude, charmed by his languid grace, exasperated by his stubborn refusal to admit that clocks or calendars existed for the purpose of appointments, shocked by his failure to comprehend what a dollar was or what security meant, and finally, entranced by his stories.

It was a combination of all these qualities, spread across two yards of lean and agile human male that established Lester as the central point of any gathering.  It didn't matter what the meeting was called for - Lester was the man you noticed.

It wasn't his position.  He was not sure what that word meant.  It wasn't wealth.  He never had wealth.  He was a good drinker, he could braid horsehair, and he could tell stories, but when it came to make money he never quite found the trick of it.

A good part of another generation will be spent in Chilcotin sorting out all the memories about the great Lester Dorsey.

For me, who will also be sorting for some years, the most recent memory will be easiest.  He told me a new grizzly bear story.  I thought I had heard them all.  By some chance I had missed this one.

All Lester's stories were masterpieces of the art of storytelling.  Each was vivid.  It was convincing.  And there was a kink in the tail.

The story was that he had gone late of a morning to wrangle horses in one of his many hunting camps in the Rainbow Mountains, a halter in one hand, unarmed and unprepared for the big grizzly that reared up out of a dry creek bed and stood puffing its breath into his face.

"Running was no way out," he said, "and I couldn't walk past him as if I hadn't noticed him.  I did the only thing I could think of.  I cursed him.  I didn't raise my voice but I cursed him.  I used every dirty, foul word I had every heard in my life."
It was something to see that bear.  He danced on one foot and then the other foot.  He shifted back and forth and he waved his arms.  You could see that that bear had never heard language like that in his life before.
After a while, the bear got down on four legs again and walked away.
Lucky for me that bear had such delicate feelings."

For a man with a reputation for being a bit on the wild side, Lester himself had some decencies.  One was not swearing when women were present.  A lot of the time he didn't remember it, but he remembered the rule more than most men.

Among either men or women his voice was soft and faintly accented from the American Southlands, where courtesy is everything that matters.

In the first of several heart attacks that finally killed him he went to Williams Lake Memorial Hospital, where there were such things unlovely to him as half-shell nighties and bedpans.  The speculation among his friends was intense.  How long would Lester stick those conditions?  To the surprise of all, he lasted to the day the doctors told him he could go.

It was his wife Mickey who revealed the secret.  "When they put him in bed I snatched all his clothes and took them home with me.  Lester is extremely modest, you know."

I remember another occasion when he was not so easily corralled.

He had come to Vancouver General Hospital to have his gall bladder removed.  He refused to remain more than a few days because, he explained, he would miss the annual fall meeting of the Anahim Lake Cattlemen's Association.  Next to the stampede, that is the major social event of the year.

Reluctantly, the doctor freed him from Vancouver General on the promise that he would touch nothing with fat in it for many weeks.  I drove him to Anahim on a trip that involved much pain for him, he having eaten largely on fish and chips, a dish for which he had conceived a sudden passion.

It was cold that winter.  The thermometer hit 55 below when we paused at Puntzi, where Mickey was then teaching school.  Next morning the car's clutch shattered like rock candy.

So we missed the cattlemen's meeting, but two days later his aching guts did not deter him from joining me on a moose hunt.  He caught a couple of horses, spilling out his shirt pocket many $10 and $20 collar bills that had been left for him at Baxter's store by a party of hunters.  I collected the money as he moved.  He didn't notice much.  As I say, he had very little interest in money.  I'm not sure he fully understood what it is supposed to be for.

On that day -10, 11 or 12 days after he had lost a fairly valuable part of his body- we rode across those lonely ranges to Gene Mooney's place. The temperature was still well below zero Fahrenheit.  Every 20 minutes or half an hour we had to stop, make a fire, and put our booted feet into it.  I remember that he wore jeans, a bitty sheepskin vest, a denim jacket, and on his head an unlined nylon parka hood he had snatched from a peg on the wall of his cabin.  Why his ears and most of the rest of him didn't freeze, I have no way of knowing.

"It's never bad when you got a horse to carry you home," he said, "there was a time when a horse dumped me in weather like this, 'way north, on the trail to Rich Hobson's place at Batnuni."

He had been wearing no adequate clothing, having been seized suddenly and without warning of the notion to ride across much of the British Columbia map to visit old Rich.  Neither did he have any matches, for reasons only God might understand.  All that bitter night he kept moving, walking a while, running a while.

"I was pretty near finished when I finally hit a cabin where there was two old trappers."

"I went up and knocked at their door."  "Good morning,' I said, 'I wonder if you could direct me to Rich Hobson's place.'

"They were pretty set back by my looks.  I guess I was pretty white.  But they pointed down the trail.  I said 'Thank you kindly' and turned and started away.  But then I fainted and fell down in the snow and they hauled me into the cabin and thawed me out."

*note...what is referred to in this article as "Gene Mooney's place", we now call Six Mile Ranch.