While going through pictures, I came across a folder I started putting together some time ago, and thought I'd share.  It was some sort of challenge that I never got finished with, but about finding photos of your five best/favorite horses.  I thought that was pretty hard to narrow down and much more difficult of a task than I was willing to take on....digging up old photos from goodness knows where.   As a kid I was lucky to have excellent 'babysitter' horses.  For the most part that is...there was certainly a few learning curves for me.  I started my own young horse at the age of 11 or 12.  It was a learning experience but after the lessons were all through (and broken bones healed) I was certainly a better horse girl and had a great little mare that I was utterly proud of.  Any photos of that little "Nikkers" mare are well buried, as are those of my 'four wheel drive' pony "Lightening" (named because of her amazing speed, of course. but then, it all seems pretty quick when you are six!).  Not to be forgotten either are old Rusty, Mars, Fatty, Troy and Spunky.....to name a few.   A story of lessons learned come with each one of these, and more.

These are some snapshots from the more recent past and present. 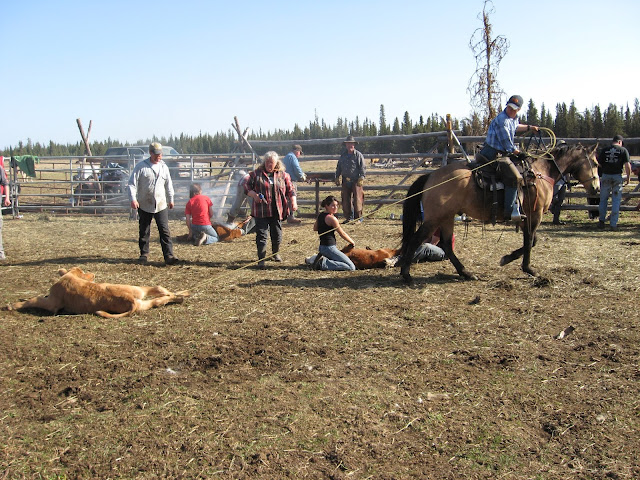 This is "Handy".  He was an easy going pretty boy I bought as a weanling.  We used him on the ranch and trail riding for several years before I sold him to another rancher.  After a sold him, the new owners send me a photo back and said "you were right, he will pull anything!"  He now quite proudly pulls a one horse sleigh, as well as calves to the branding fire! 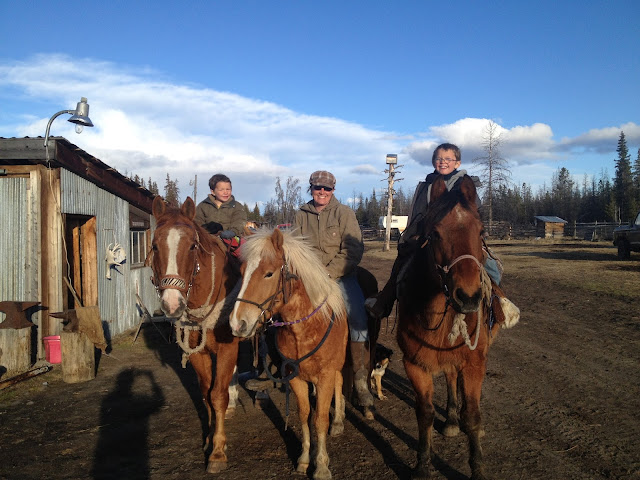 Two wonderful old horses here, and my bratty pony.  On the left, being ridden by Ben, is Spud.  I had bought him when I was in high school!  He stayed on the ranch and packed many guests in the mountains.  However, I think he was born to be a kids horse as he sure works hard for them.  He used to be darn good at 'messing' with guests.  Nothing bad or dangerous, just annoying.  Like waiting until they were on the rock and ready to put a foot in the stirrup before casually stepping away....or travelling at a snails pace if given his way, or doing his darnest to eat at any opportunity.  With a kid on him, he is so amazingly kind and patient.  I have a photo of him somewhere, standing by a gate, with Jackson attempting an amazing leg split to get on.  Spuds reins are hanging and if he moved even an inch, Jackson would have crashed hard to the ground.  But even in the photo you can hear him saying "you got this, kid!"  Of course he did not move even a muscle (even to reach for that tasty blade of grass!), Jackson managed to haul himself aboard and they started back down the trail, both grinning proudly!

On the right is everyone's favorite horse "Stormin' Norman", packing Jackson this day.  I started him about 100 years ago and then he was mum's main man for many years.  An extremely competent and confident horse, full of character but totally honest.    He also packed guests for us in his later years and was wonderful.  Guests soon realized that he knew substantially more than them and could be trusted completely.  Norman is now retired and living the easy life with our very good friends in Saskatchewan.

I'm on my bratty pony 'Percy Sunshine' whom I traded for my City Boy horse this spring. 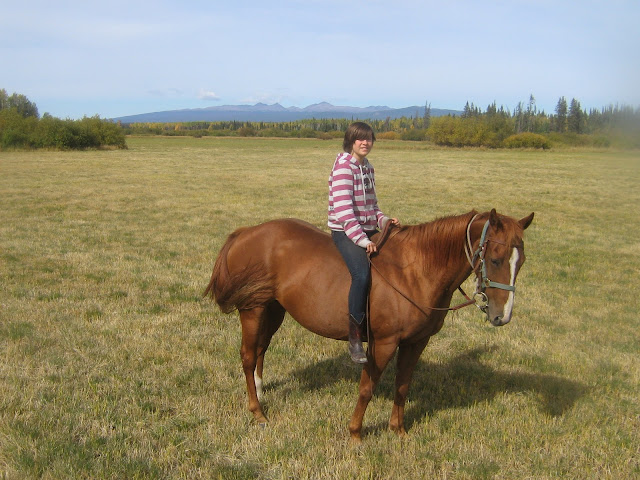 Ah, Kara riding my "Hope" mare.  This mare taught me more about feel and timing than I still even realize.  She certainly has some age now, but you'd never know it.  She is living with Spud in Bella Coola, both of them semi retired.   (I named her "Hope" because I bought her out of a sale.  I just kept thinking "oh, I hope she is sound, I hope she is sound......"  She was.  :) 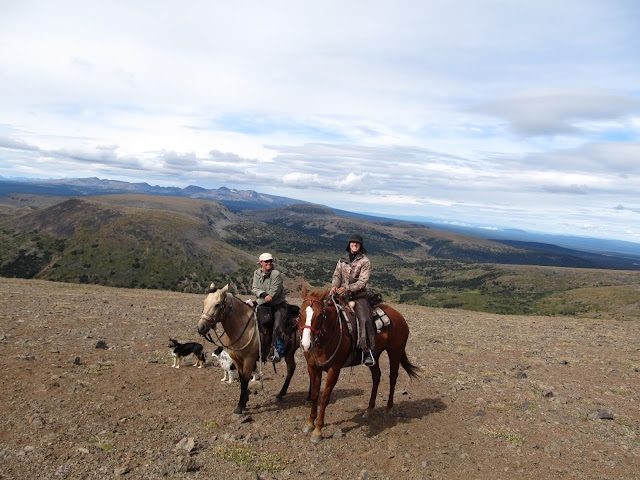 Me on my amazing and once in a lifetime mount Riley.  Enough said, I've talked about him plenty in this blog.  Nikky is here also, on her great mare Pocket.  We are in the Itcha's with the Ilgatchuz behind us. 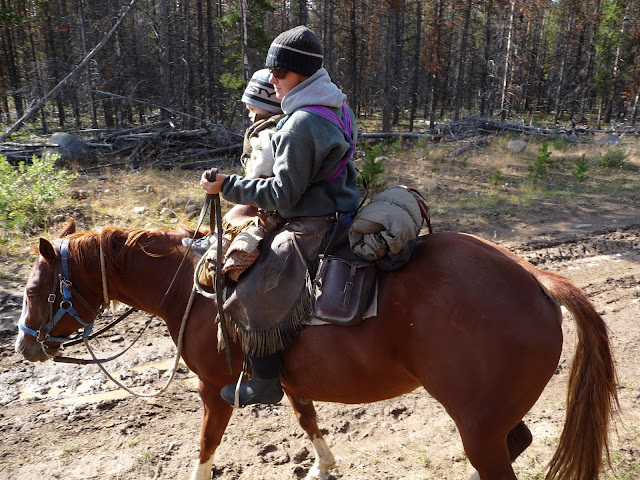 One of the greatest horses in the area.  This is "Rea".  She is out of our stock and is a big stout mare with an amazing mind and the most honest heart.  She was mums main steed for many years until her front end started to go.  I got married on this mare, and almost always chose to ride her when I was pregnant and or packing my boys.   Along with being solid as a rock and utterly trust-worthy, she is also very broke and certainly has more experience than most.  I remember once I was packing Jackson and moving cows up a big opening to range, pushing fairly hard to get them moving.  I could see there were two bulls starting to fight and as I started move away, they blew right through the back of the herd and directly towards me.
Fighting bulls can be exceedingly dangerous as they see nothing but the fight and can have the power of a run away freight train.  I've literally seen them take out trees.
For a split second, Rea and I both watched the inevitable about to happen.   Then with my frantic nudge backing up her instinct, she crouched and spun off to the side.  I literally felt the one bull rub against my leg, they were so close, and if she had not moved exactly as she did....   Extra hugs that day, and many others.
Jackson is lucky to be able to call Rea "his" horse (although mum borrowed her back for a while when she broke her wrist last spring) and I'm sure Ben will get a few good years out of her too.

Makes me feel pretty privileged when I actually stop to think about, and write down a bit about the horses in my life.

As usual another great blog! I'm absolutely awestruck by that photo in the Itchas! I need to go there. I'd like to camp looking out over that view! Wow! I'm not surprised that you've had wonderful horses. I'm sure you make all the difference with your easy-going and sturdy ways plus your calm yet strong aura. Horses have a 6th sense about that sort of thing. They know you're all good people out there on those ranches! Cheers to your great horses,dogs and friends!

Nothing better than great horses. One of my favourite posts! ❤️