Fencing, turkey cake and a celebration! 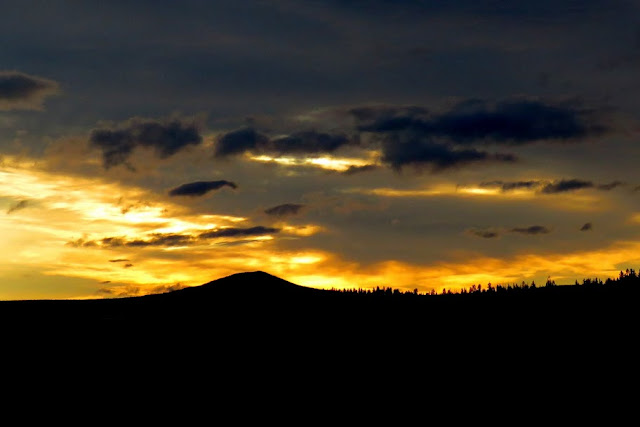 Well, now that Five Mile is really 'ours', we are scrambling to be able to use it this fall!  I've probably mentioned that the fences are really terrible, so we are quickly trying to patch up what we can.  We will start to put our own cattle in there right away, but have to fake some sort of barrier so they don't just wander right back to their usual haunts again.  After we feed them there for the winter, they will be more comfortable and willing to hang around.  The feed is plentiful and the cattle will do well there.
So why no pictures you ask?!  Well, I've not really gotten back in to the habit of taking them!  Not to mention, when it is just Ben and I (this particular time), I've got way to much going on to think about taking photos.  Keeping an eye on a very busy six year old so I don't fall a tree on him, or cut the leg off Dealer dog, who insists on being as close to me as possible, takes my full concentration.  Ben was great help and helped drag rails, find the wire I was constantly leaving behind and kept me entertained with his constant chatter and questions (are we done yet?) 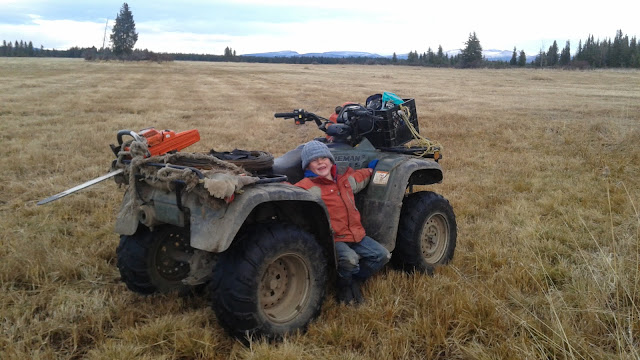 So I just have the one photo I finally remembered to take of my top helper.
Snow in the mountains......

I went fencing again with Magalie and Chloe the next morning and we put in a new bar way to connect the new hay meadow to our range and fixed more fence.  (Didn't remember my camera at all that day!)  That was Thanksgiving Monday and we headed home after lunch as the guys were arriving down from the last hunt and friends and family were gathering for a turkey feast!  :)
We had invited some relatively new friends who have moved to the area, and Amy enthusiastically offered to bring the desserts.  WOW!  She brought a beautiful 'horn of plenty' made out of braided bread, spinach loaves, cheesecake, pumpkin pie, cream puffs and the CUTEST darn turkey cake you have ever seen! 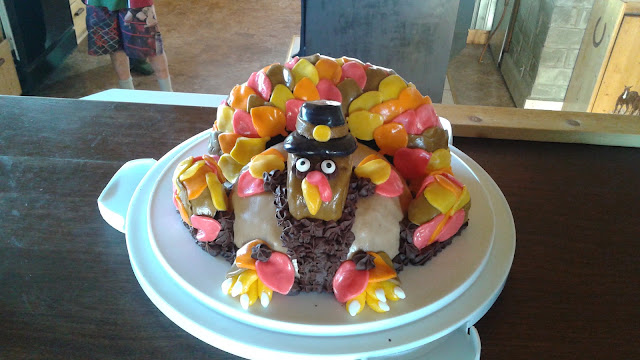 A true work of art, wouldn't you agree!?
She has certainly set a standard now, and we are looking forward to enjoying more of her cooking!

We were all admiring it and thinking it was more a work of art than something to wreck by cutting up.  Ben announced instantly "I will cut it, WITH MY TEETH!"

So the hunting season is officially over.  Overall it went excellently I think, and it is kinda nice to get that first run under our belt.  I don't have Eli's camera yet to put up current photos, but I'm going to add in one of my favorite shots of Jackson, many years ago. 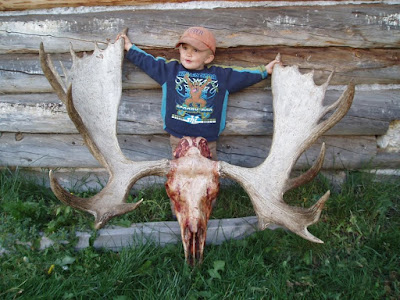 It is always so fun to let the horses loose after a long trip.  We unpack and unsaddle everything and then let them go all at once. 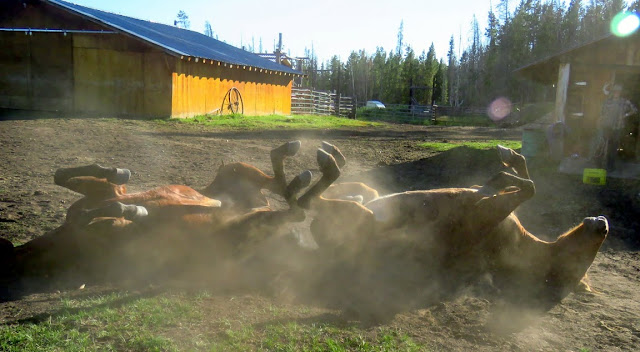 As many times as we have watched it, letting the horses go is always a highlight and anyone around stays to enjoy the show.

They have a good roll, perform quite an amazing  jump and leap and parade around the tack shed, happy to be free of packs and saddles.  The very ground shakes as even the big draft horses bounce and strut their stuff (likely showing more energy than they have the entire trip) and contently trot off to the pasture.  Very fun.

This particular time they did their usual routine for our entertainment and then went around to the pens to get to the salt blocks.  All of a sudden, one of them remembered they had just finished the last ride of the season and HOLY SMOKES did they tear out of the pens and up the flat like the very devil was on their tail, leaping and bucking and "wahooing!" all the way.   Tinker leaped so high in the air it looked like she was trying (and quite possibly succeeded) to clap all four of her feet together!  There was such a commotion that all the other horses got caught up in the spirit of the celebration and the whole herd raced around in circles, high fiving and congratulating each other.  It was sight to see, I can tell you, and I sure wish I had a video camera.  Makes me grin to just write about it. 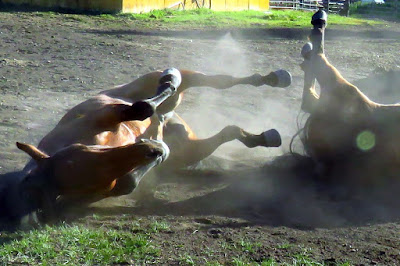 Both photos of the horses having a good roll this summer are credited to Lisa H.

We are getting serious now about 'rounding up' the cattle as we will ship out the calves on the 26th.  Hopefully the weather holds for us....we usually seem to finish up in the snow! 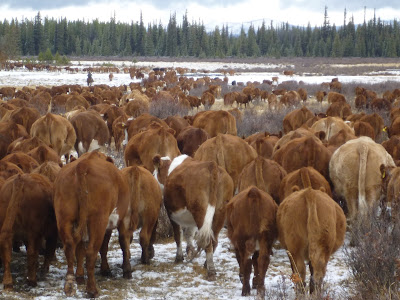