Well, I won't bore you all with why I've been so long since my last post.  I just want to say that I'm very very relieved that the Five Mile sale is finally truly finished and the previous owner and his cows are gone.  And now we can begin to figure out how to integrate the property into our current operation.  'Bout time too, since the first payment is coming up all too quickly! 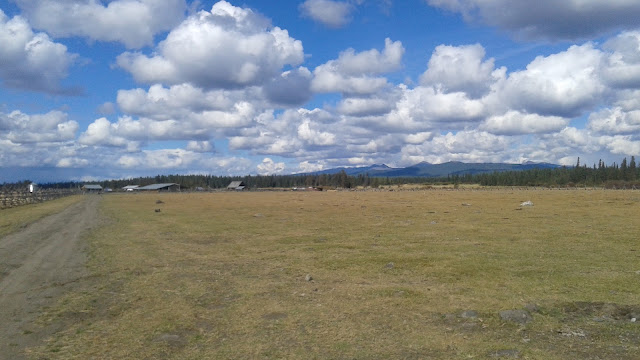 Looking across the pasture to the Five Mile ranch site.  Ilgatchuz Mountains in the background.

For tonight I thought I would chat a bit about the ranchers/farmers paycheck.  Once a year.  No, that was not a typo.  We get paid once a year.

My farmer/rancher friends are have a funny grin and a sideways look right now.  The rest of you can hardly believe me.
Imagine, working and incurring a years worth of expenses before getting your one paycheck.

And fully depending on the very volatile markets for that one check.

A freak snowstorm could be the difference between making or breaking your year.  A sudden drop in the American dollar makes a massive difference.  The amount of hay or grain put up in the prairies is hugely relevant.  And God forbid something like "Mad Cow Disease" hits and turns the entire market upside down, for many years.  This I know well.  We bought our ranch and our first cows with calves just weeks before the panic button got pushed in 2003.  We went from paying $1500 dollars to literally having to pay to take them to market, they were worth so little.  Such a political move and so media driven....  Seriously, how many people do you know that have died, or even been affected by BSE ("Mad Cow Disease")?  On the other hand, it did get Canadians  to think more independently and forced us to create a stronger industry.....not a bad thing if you survived it.  Most didn't.  It is interesting to note that while cattle prices are certainly up now, and the consumers are definitely feeling it, beef was far from 'cheap' when the ranchers were getting paid a third of the current price.  Hmmm.... 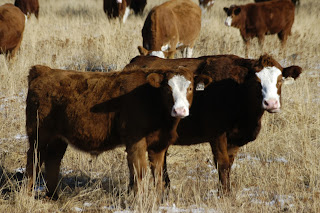 So back to the 'once a year' paycheck.  (To be clear, many ranchers have jobs away from the ranch to help support their cow habit.)

Most local ranchers round up in the fall and haul to the market on a specific date.  Advice is to 'follow the market' to sell, but somehow having to book your cattle trucks months in advance makes that pretty tough.  Just gotta pick a date and go with it. 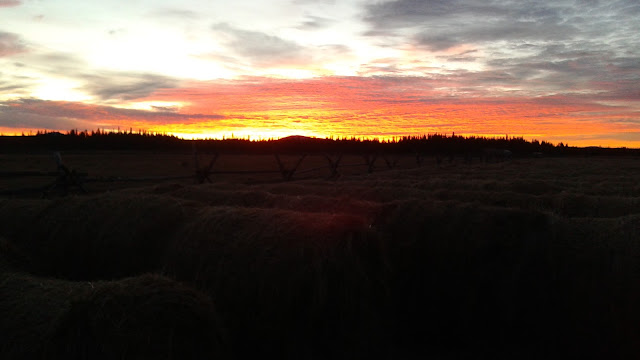 So in you go to the auction mart and sit with all the other ranchers nervously chatting, and pretending they are not crossing every digit possible.  You can always tell, even if you don't know them, whose calves are selling.  A look around the ring will show you.  It is the person with the stiff back, the red face (that pounding heart!), the solid stare as calves are recognized, and the intense listening as they will the buyers to pay just that little bit more.    Not that many years ago, when the auctioneer finished selling, there were just  long sad looks, shrugs and hung heads.   I'm delighted to say that these days, it usually ends with a deep breath and a grin, a handshake from a neighbor and the usual conversation about how prices were better last week.  But no one is too sad, really.

We normally sell at the very end of October, but this year decided to try something just a little different.  There is a relatively new option to sell via a 'video' which is literally set up in the sale ring.  Cattle are bid on exactly as if they were in the ring but you can pick any sale to sell them at.   However, you cattle are still at home (our are not even rounded up yet) as you also choose the delivery date (announced to the buyers of course.)  Generally they are sold as a liner load, so you have to have a fair amount of cattle to do this.

When they are sent in, the stock yards crew will sort of the loads already sold and away they'll go to their new home.  We will sell the rest through the ring as per normal. 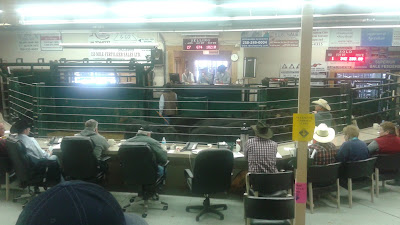 This is a not so good photo of cattle in the sale ring, with the buyers sitting around the outside.

We decided to put up for sale one load (100 animals) of 500lb weight average steers, and one load (105 animals) of 585 lb average steers.
And just because our calves were not actually in the ring didn't make my heart pound any less!
We did very well anyhow, and were happy with the prices we got.  Did I mention they were better last week?  Haha!

So I thought that I would share the video that the cattle were sold on.  Of course, our cattle are mostly being sold on their reputation and it probably wouldn't make a difference if we even had a video/pictures.

Cheers all, until next time!
Punky

Oh, and by the way, I'll have some hunting posts up soon!  The guys have been doing well this season, and no one has complained about the pink cheesecake!  I'll just wait until I have Eli's photos to share.....
Posted by Terra Hatch at 21:08