We've been watching the cattle closely and snarling at the weatherman at every mention of snow or cold all Fall, as per normal.  Because in Anahim Lake for some reason, the predicted "-12C" almost never fails to hit "-20C" and the "skiff of snow" doesn't stop for several inches at least. 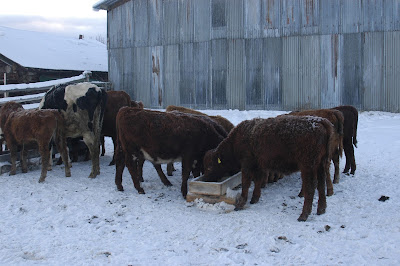 The 'misfits' inhaling their grain.

It just depends on your perspective....when you are an avid snowmobiler, holding your breath until you can go sledding, any hint of snow is reason for hope and joy.  When you are a rancher and horse herd owner, looking at feeding up to 20 round bales of hay PER DAY, too much early snow and cold is as dreaded as a dose of the plague.  When those big beautiful flakes start falling in November,  I get that cold 'hair standing up on the back of your neck' feeling and it doesn't go away until the sun shines again! 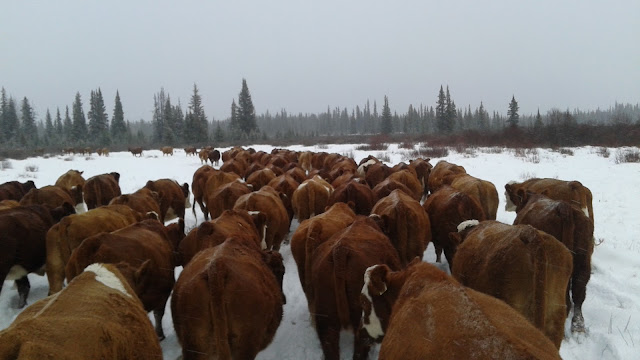 Trailing  for the feed grounds of home on a cold grey day.

But really, we've had an excellent fall and the cattle have done well.  Now, in mid-December, the snow is starting to pile up a bit, and it's time to bring the cows in, but we are comfortably within our 'hay budget'.  We are actually having a tough time finding the last stragglers as they are quite happy still 'out' and have no interest in coming home yet. 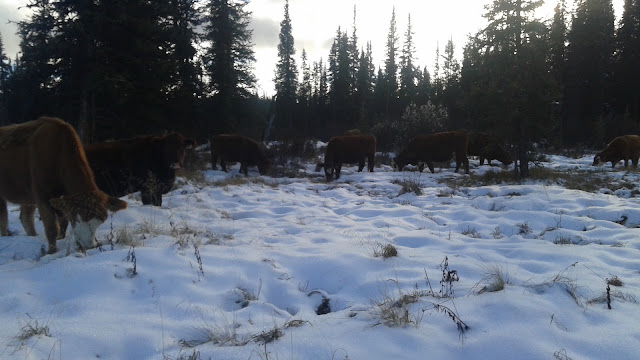 They are quite funny actually, when they get used to rustling, and are not thinking about tractors and feeding.  Although we have the majority in, with our 'eyes in the sky" (I'll mention again how awesome having pilots for brothers is!) we have found several small groups.  Yesterday, Eli and I headed up with a tractor and bale of hay to where we knew there were three cows in an area.  Unfortunately for me, it had gotten too late to ride my horse back home when gathering another area the day before....so I was on foot.  Gawk! 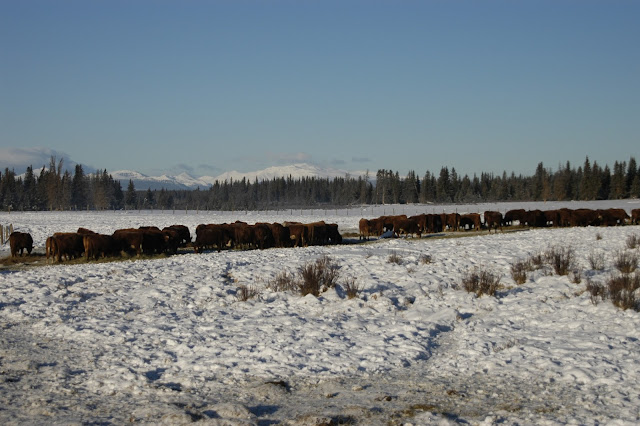 Anyhow, the dogs and I found fresh tracks and followed them in to where the cows were quite happily munching on the snow buried grass.  They had just discovered a newly accessible area (due to a creek freezing over), and were pretty proud darn of themselves.  And not hungry or particularly interested in coming home.   I was talking to Eli on the radio, so he had the tractor positioned to where the cattle would come out of the brush and I could hear him calling them.  The cows wandered this way and that, not trying to get away from me, just doing their cow thing.  I finally got them turned in exactly the correct position to have their line of sight direct to the waiting bale of hay.  And finally, after going back and forth, back and forth, through the brush (as usual I'm over-dressed as I am allergic to being cold, and now nearing a cardiac arrest due to overheating), one of them finally locked eyes on the bale of hay, only 30 feet away (with the tractor still running and Eli still calling).  And all of a sudden the LIGHT comes ON, and you can fully hear the pure delight as the enlightened cow says "Waz ZAT???" then........... HEY, there's HAY!!" Then they all giggle and chuckle their way down to the ranch, happily following the tractor and fully confident that a winter of "full serve" grub is before them.  And I'm here to tell you, after they get that first bite of hay, they don't forget again what, in their opinion, a tractor is for.  Until next fall that is..... 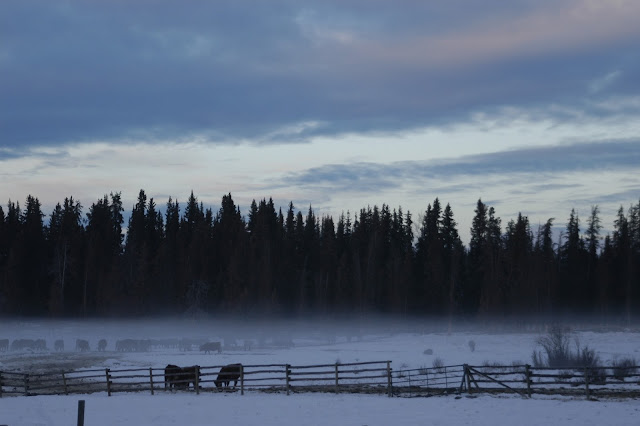