Well, it is official.  Calving season is upon us.  We have about 20 on the ground now, and from the looks of the pens, we could get another 2o in the next day or so.  But bring it on, I say!  Weather is great and if we are going to be busy, we might as well be busy! 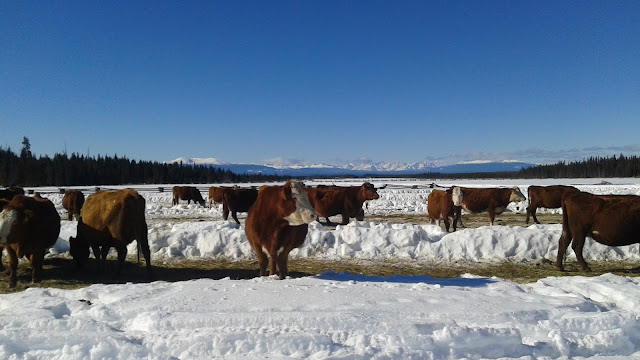 So far everything has gone quite well, although we did have a bit of a morning adventure the other day.  I had just headed out to move the yearling horses and spied, down in the pasture, four cow legs in the air.  Never ever a good sign.  Sure she was dead, I nevertheless dropped everything and climbed the fence.  Part way to her, I noticed a foot move and started hollering like mad back to the barn.  Luckily, Eli heard me and came running down with a halter and a rope.  The term "on her back" basically means just that.  For whatever reason, the cow has tipped over past the point of where she can get up again.  An example would be when they lay down with a hole or indentation behind them, and just get over balanced.  They bloat up very quickly when it happens, and don't live long.
When I got to this particular cow (a first calver), it was obvious she had been on her back for some time (she had beat her head against the ground trying to get up, giving herself quite a nasty 'black eye') but once we had a halter on her, pulling and pushing, she was able to sit up, and then stand, on very shaky legs.  But we were not done yet.  The two feet sticking out of her rear end clearly indicated a baby was on the way.  I kinda think she was calving because of the stress of being tipped over, but maybe not.  In any case, the calf was still alive, but swelling quickly and desperately needing to get on the outside of his shaky momma.  We sent Jackson running for the chains ("GET THE CHAINS....just ask Grandma for the bucket!") and very quietly managed to sneak the confused mother-to-be in to the maternity pen in the barn.  We got the chains set and began to pull, but the natural lubrication of the process was gone and it didn't go easily.  We got the baby out (still alive!) and were able to clear the lungs and get it breathing, but the back half still stuck stubbornly in the mother and refused to budge.  It is terrifying to me at this point that the calf could live so long under such terrible stress, and then we might actually kill it getting it out the rest of the way.  Long story short, the momma eventually went down to the ground, and as she dropped, and we pulled, the baby popped past the hips and we had her out!  And what a go getter she was, right from the start!  The most amazing part is that the new momma accepted her baby, right from the time she got back up on her own shaky legs again.  We were fully anticipating that she would relate the baby to all the pain and stress she had gone through, and even stayed close to make sure she didn't take out her anger and frustration on it.  It happens, trust me.  But nope, the mothering instinct took right over and she is now the proud momma of a healthy heifer calf.  Hurray, success!!  (Jackson and Ben went back to the house and announced to Grandma that the calf was alive but it was really stretched!") 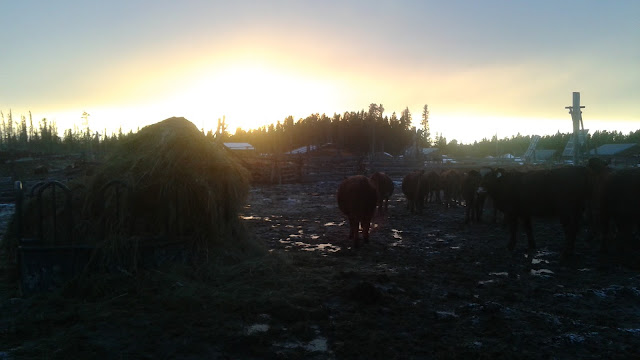 I've had a question recently about why we move our stock around so much.  Thinking back to other posts, I guess it does seem like we move them quite often.  But there is a good reason.  Food.  In the spring and summer, we are always riding to keep a good eye on the cattle, and this is for two reasons.  One, to make sure the cows are well grouped so the bulls can do their job (and hopefully the bulls are healthy and sound) and also to make sure they are in the best feed possible.  This is important so we don't overgraze any particular area, and keep our herd in as good of condition as possible.  Our range is huge (tens of thousands of acres), but don't mistake this country to be similar to what most are familiar with.  This isn't beautiful rolling prairies by any stretch of the imagination.  Most of our country is covered in trees, where no grass grows, or wet boggy swamp, completely inaccessible until frozen in the fall.  The actual percentage of good grazing ground is not really that big (which is why we need so much range land) and often in smaller pockets with plenty of distance between.    They will move themselves of course, but tend to scatter, and/or concentrate on their very favorite areas if left completely alone. 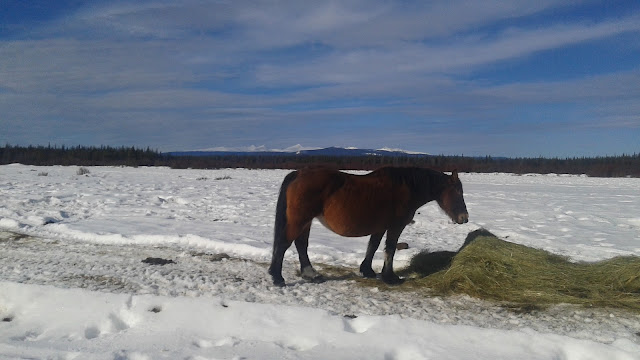 In the winter time, we move our cattle to where the hay is.  Mostly this is for convenience.  It is much simpler to move 300 cows than it is to move 1000 bales of hay.  It is also nice to not be too concentrated in any area.

I've mentioned before that we almost always have our cattle separated by age, so this makes for more moving and more work.

I've recently found a website that I can get government maps from, which is pretty cool.  I haven't had time to search around much yet, but will eventually come up with some maps to show the combined ranches and ranges. 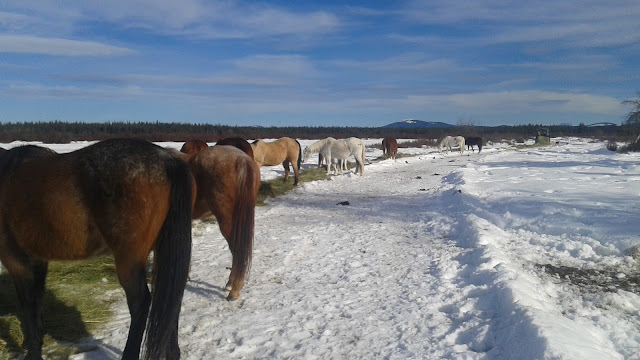 When I talk about 'moving' to my parents place (Six Mile), it surely seems strange.  Our ranch sites are only about 20 minutes apart (by vehicle) but we move up here because it is an "all hands on deck" operation at this time of year.  We run our cattle with mum and dad's completely (we have never actually had them separated out) and it is just easier to just camp out for a few weeks.  They have better calving facilities (pens and barns) than we do  and also there is more hay put up here than at our home place.  We will start hauling cows and calves to Three Circle (our home) soon though.  This gets them out of the concentrated area, on to clean ground and out of the way. 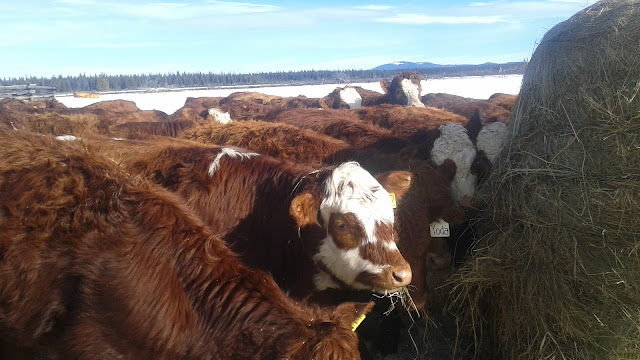 Every ranch has a different way of doing things, this just works for us and our situation, climate and environment.

On that note, I'm late for my bedtime and my check is coming up too quickly already.

Cheers all, until next time.
Punky
Posted by Terra Hatch at 22:49

Thanks for tackling my questions in the midst of calving duties. I'm quite happy to wait on the maps - which would be very helpful - until a quieter time. Those calves must really keep you hopping. I am very happy you were able to save both the cow on her back and her calf. Whew!