We've officially moved now to Five Mile.  It's a great place and makes sense for the good of the ranch, but no question we've bit off a significant bite.  Lots and lots of work, but progress is being made.

The main house is quite beautiful actually, and with it's new paint job and some basic reno's, it has become our home.  Well, becoming.....  We are still looking for places to put stuff and no pictures have found homes on the walls, but we are getting there.  Luckily there is a whole other house to use for storage while we organize this one! 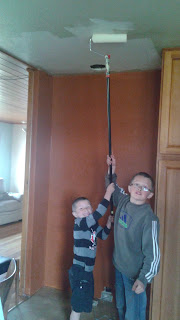 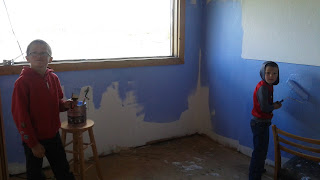 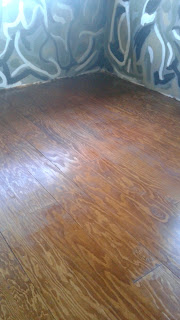 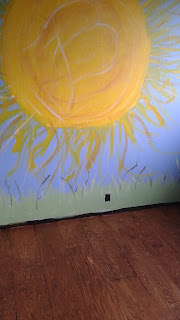 Some of our reno projects.  Jackson and Ben have been awesome about helping out.  The bottom photos are of Jackson room and then Ben's with the sun.  The flooring is literally plywood cut into strips, laid down like laminate flooring and then stained and finished.  Neat hey?  Charley has also been rebuilding an addition to the house, which is a major project.  The rain isn't helping that.  We still don't have water in the main house, but soon now I hope.

Of course the ranch work has not slowed much either, although everyone has been quite patient while we tried to get things sorted and moved.  The cattle are all out on range of course, and really doing well.  We have not had any predator problems lately which is wonderful.  The spring started out amazingly dry, but then that changed very quickly as well.  Several days of rain and 8 inches of snow certainly helped bring the creeks up!  Yick.  Our neighbor had 15 inches!!  Amazing.  Was nice to have the moisture, but it sure didn't do the leafy trees, brush or thick hay any good.  Much is laid right over still.

But Mother Nature will do as she will. 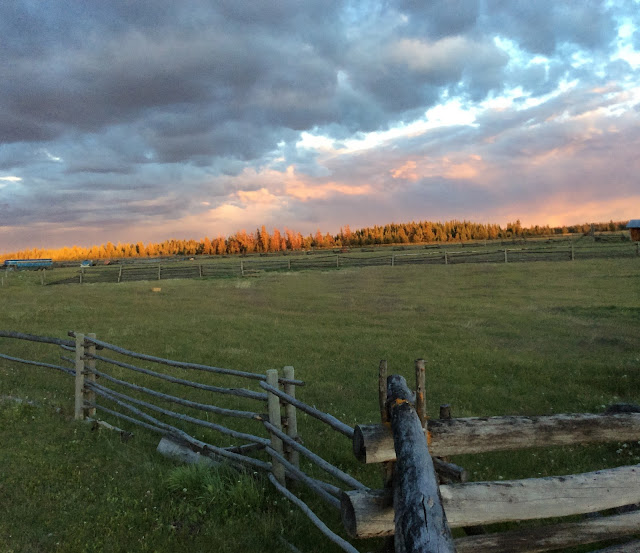 Before the storm came in. 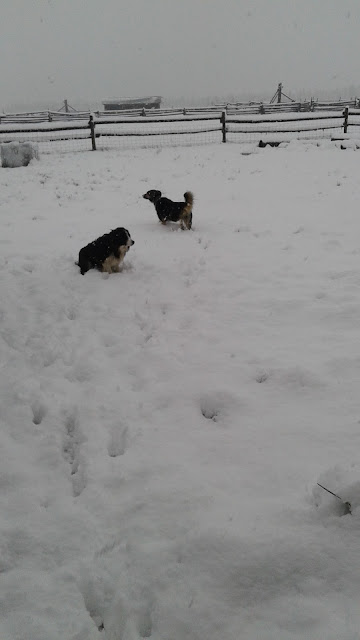 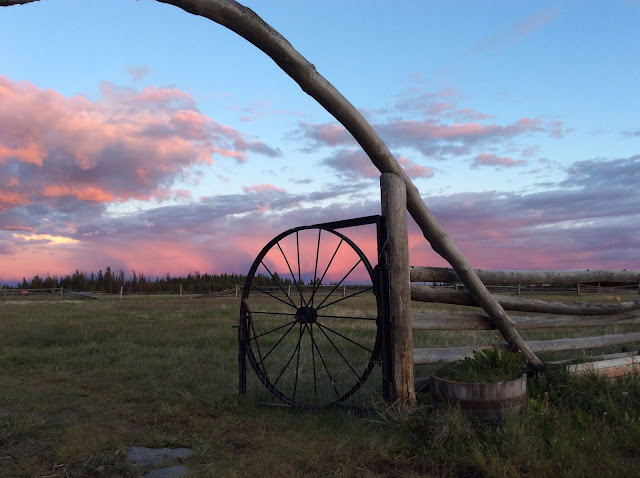 We get the wildest night skies here.  It's very open so you can really see a long way.  Beautiful.
I just quickly took these photos with my tablet, no filter at all.  Crazy hey? 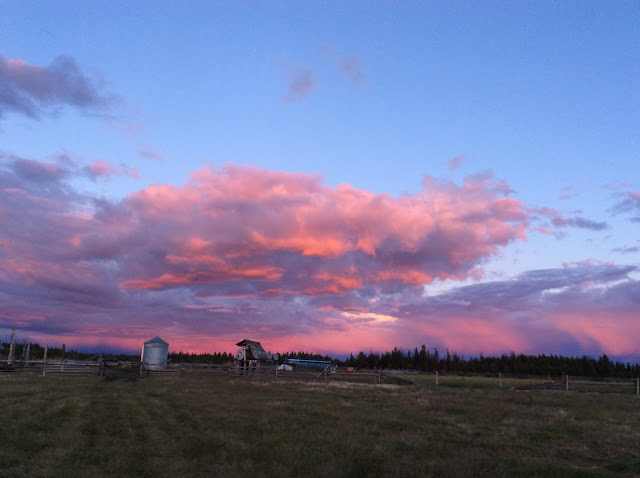 Let's see, what else?  Oh, we worked with Evan Howarth starting colts for a couple of days and my good friend came down from Prince George to participate.  A good break from the regular grind and as always, very much a learning experience. 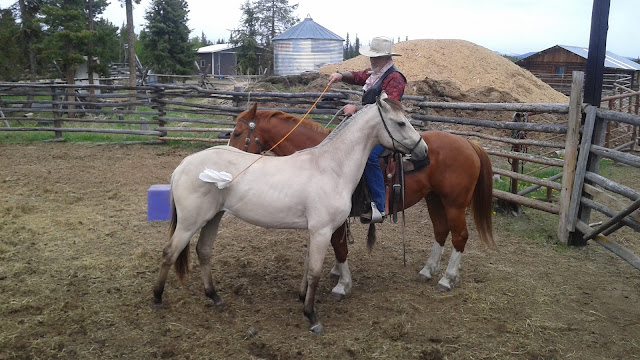 I had a call from a good friend and neighbor a while back....actually it was the same time as the colt starting clinic.  Anyhow, long story short we ended up doing a cesarean on one of his young cows.  She was very exhausted when we got there, and in fact, when we made the initial assessment, I pronounced the calf already dead inside of her.  We tried to position the calf to pull it, but it was simply to big for her.  As we were making the decision of whether or not to try the C-Section, I felt the tiniest movement from the calf.  Decision made.  And although he was extremely weak, the calf came out alive.  The wee momma came through her surgery with no apparent problems and eventually the calf got strong enough to nurse (rather than being bottle fed).  And she liked him!  Totally amazing all around.  Love those success stories.  We went out to dinner there several days later and we both had to run down to the barn to admire the new momma and baby bouncing around.  I honestly couldn't stop grinning.  Their chances were both so poor when we started that it really was pretty awesome to have them both live in the end.  That was actually my third cesarean this year.  Besides the first one I wrote about, we had another at the ranch with a twisted uterus.  That was pretty amazing to feel from the inside!  Momma and baby were both fine.

So yeah, it's been busy.  :)  I'm actually in the process of looking for some full time help, with the priority being the boys, but also to just be my right hand.  Being full time now on the ranch and juggling the school routines is a bit much.....hard to get much done when I have to be leaving to pick them up from school in the middle of the work day!

Alright, I've snuck away from the unpacking, cleaning, painting, horse shoeing and cowgirling long enough....back at it.

Cheers all, and all the best!
Punky

Well, I said I would post before another month went by, and I made it didn't I?  Almost?
Life has been bordering on insanity lately.
Among the rest of the ranch duties, we've been frantically cleaning and renovating and moving to the Five Mile home.  Since the Internet arrived yesterday and we all slept in our own beds last night, I guess you can say we've officially moved.

But more on that later.

I got my desktop computer hooked up last night and as I opened everything up, a specific quote stared me in the face.  It certainly strikes true right now. 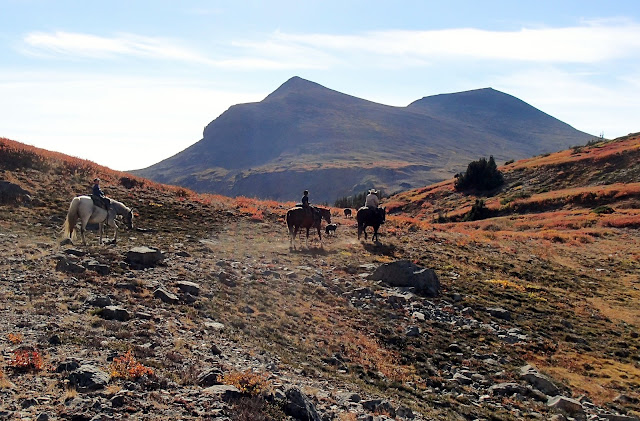 If you want to feel rich, count the things you have that money can't buy.

Cheers for now folks, I'll be back....and again, thanks for your patience and support.