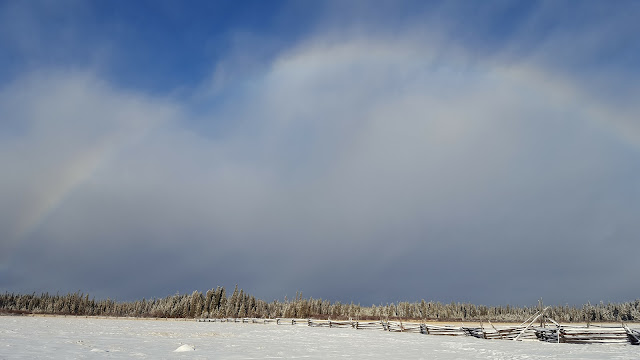 "You know, Thomas, people make me so sick always bellering about roads and such things, when life should be simple and enjoyable."
"Let's turn back.  This ain't my idea of a good time either."
"Hell, no.  We'd just have to listen to another lecture about progress like the last one.  We better line up this road some way and get it over with."
"Ya, I guess so.  See that mountain over there?  We gotta hit the low side.  Line it up with Anahim Peak and we got it made."
"Sure.  All this talk about west and compasses makes a hell of a lot of hot air if you ask me.  You make the first blaze.  When you're blazing I'll pass you and we should make out that way."

Darkness caught them in a swampy opening.  They staked the horses while the packer made camp.  They had covered thirteen miles of unmarked wilderness and had another twenty to go.  The sleeping bags were thrown on top of their chaps and covered with damp mantles.  There wouldn't be much time for sleeping anyway.  Rain still drizzled down.  The camp was silent.
At daylight Lester and Thomas looked out from their sleeping bags.  The forms of the four horses were barely visible.  It was time to get going.  They reached for their boots, plunked on their hats and were ready for the day of engineering.  By the time the horses were saddled and fed oats, the packer had food ready and they were off.
The rain has stopped but the trees were still dripping and before long the trail blazers were soaked.  They increased their speed to cover the given area, and the packer was left miles behind to follow the newly made blazes.  The drizzle started again and the mountains were completely hidden.  The cowboys sharpened their axes, ate a damp sandwich, rolled a smoke and meditated.
"Maybe I  had better climb a jackpine and see how the country looks."
"Good idea."
Thomas looked the landscape over for the largest tree, settled for one and slowly removed his chaps.
"Wonder where the hunters are.  They should be nearly at Anahim by now and I haven't even gotten my horses ready."  He stopped talking until he reached the top of the tree, then he removed his hat and waved in the direction of the mountain he had hoped to see and he smiled.  Through the mist he had located his landmark.  They were in business again.
They skirted bog holes, jumped windfalls, climbed the rocky ridges and blazed the trees from their horses; but when darkness came they had reached their goal, and the open stretch of Saddle Horse Meadow lay before them.
The men and horses were tired.  They built their campfire and rested while the packer caught up to his outfit.  The survey had been completed. 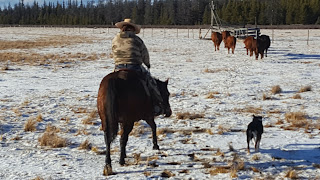 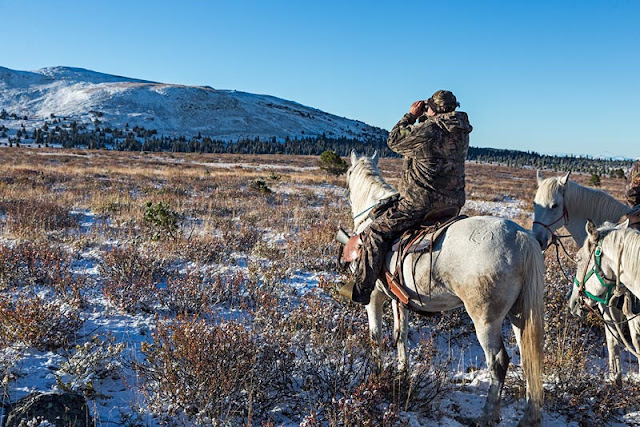 The road had been blazed up the mountainside in Bella Coola, away from the Hotnarko Canyon to avoid rock work.  There was not enough money for a road of this type.  At the mountain top the trail blazers ran into difficulty.  Swamps, lakes and ridges lay ahead and after a a few uncesessful sttemps, somehow this survey was forgotten.

On September 12, 1952, Lester went to Anahim Lake to get the mail and the local news.  Road building talk was in full bloom.  The bulldozer from Tatla Lake had started up to push the road through to meet the Bella Coola crew.  Alf was a good bulldozer man but this was new territory to him.
Lester tied up his horse to the hitch rail and joined the cowboys in the store.
"Looks like the road might go through after all."
"I hear Alf Bracewell was on the way up to push it through."  "
There's a call from Bella Coola.  We're to show him the way."  "
You show him, Lester."
"No time.  Still haying and I have to go hunting.  Tell him to go west."
"My God man, west is a big territory."
"Well, who ever heard of people building roads in the hunting season."
"He might just bog that cat down."
"Well, it's probably insured."
The store keeper was becoming agitated.  "Looks like we won't get a road without more co-operation."
Silence.  The store-keeper paced the floor.
"You go Thomas."
"Can't.  My hunters will be here tomorrow night."
"But the guy doesn't know the country.  Give him a break.  Go west, that's a helluvaway to treat him.  You can even bog a saddle horse just going west."
Thomas studied the toe of his right riding boot before he looked up.
"Tell him to keep away from the Big Swamp and Rosa Lake."
"And how will he know those places.....by reading signs?"
Lester got him from his perch on the nail keg.
"Guess we hafta go Thomas.  I have only two days before the hunters come so we better start at daylight.  Camp out one night and get back by dark the next day."
Thomas stood up as a sign of acceptance of the inevitable.
"Somebody better come and lead a pack horse.  We will need oats for the horses."
So the survey matter was simply settled.  That night Lester and Thomas slept by the heater in the store.  The horses were given a good feed and tied to the nearby hitching rail for an early getaway.
In the drizzly morning they shouldered their axes and climbed on their horses.
The store-keeper walked towards them looking intently at something enclosed in his first.
"Maybe you boys should have a compass."
"What for?  We aren't going to have any time to fool around with things like that."
"I already told you we have to get back tomorrow night.  We just intent to go to Saddle Horse Meadow and blaze the trail the only way it can go.  That compass has no place in this tour."
"Tell Alf the blazes won't be too close, but if he really looks good he'll find them."
They rode silently down the short roadway each thinking of the hunt that would take place in the next few days.  Trail blazing the third outlet to the coast was a boring adventure compared to a caribou hunt in the mountains when Indian Summer was at its best. 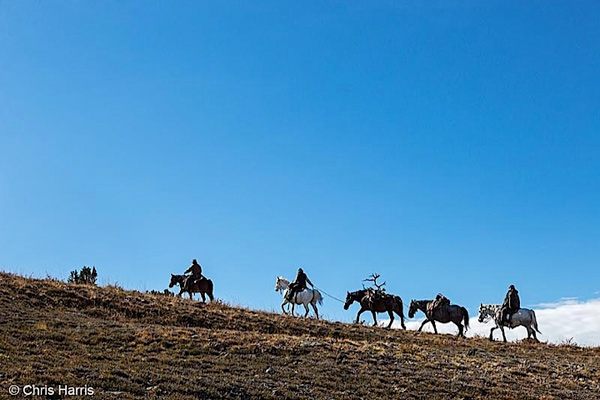 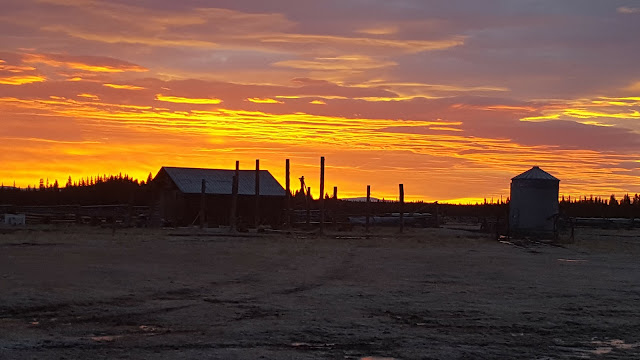 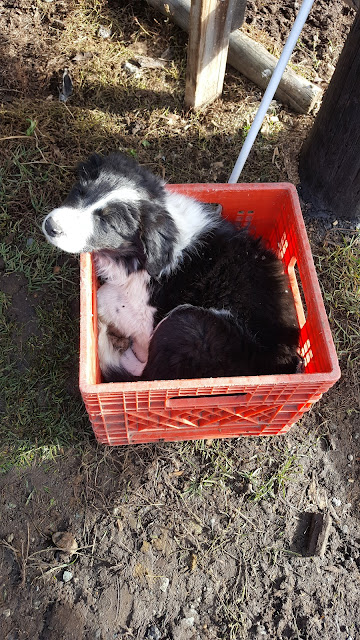 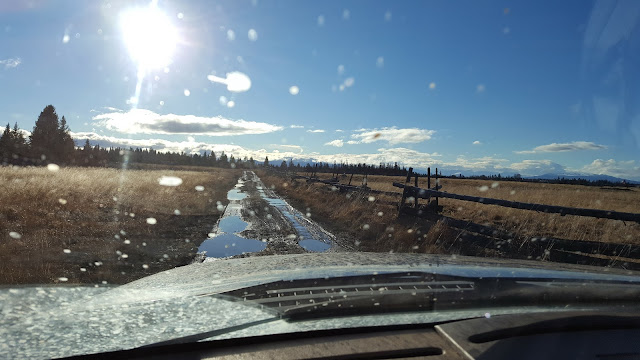 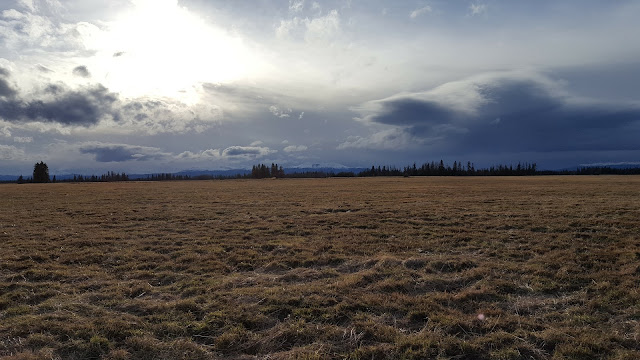