Sometimes when I'm thinking about writing, I feel like I could just re-post from my first year of blogging.  I was pretty dedicated for one thing, and really, the seasons just keep going around.  This time in 2015, I was writing about sorting cows for calving, vaccinating and retagging the first time mommas.  And you'll never guess....but we are in the midst of it all again.  The biggest difference is that we are on "D" names now, instead of "Z" names. 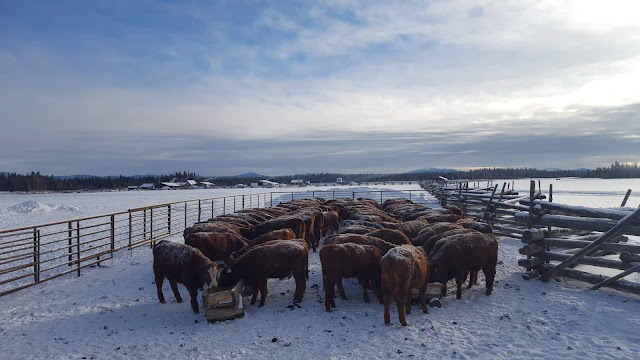 At the grain troughs.

But not to start off on a sour note!  All is well as can be.  Mother Nature could certainly do her part and turn up the thermostat (!) but overall we are in good shape.  The cows are in excellent health, strong and sassy.  The feed has held out well and proven to be of excellent quality (hence a strong and sassy cow herd).  We are nearly plowed out around the ranch, barns are prepped and we've got good help lined up.  The first and second calvers are sorted and processed and ready to go.  Tomorrow we will move the main herd up to Six Mile and start sorting them.  Not a quick or easy job there.  We will pull off the ones we feel are closest to calving, and keep them at the ranch site.  The others will be taken back out to the feed grounds.  This process happens at least once a week during our calving season.  It's time consuming but well worth it as, for the most part, we are able to have all calves born in a clean dry area, with access to help from us if necessary. 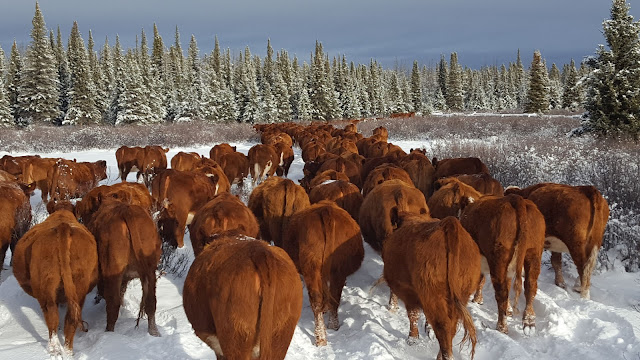 For now, I'm consciously enjoying each full night of sleep in my own bed.  That will all very soon come crashing to a halt as these last few days will be the calm before the storm. 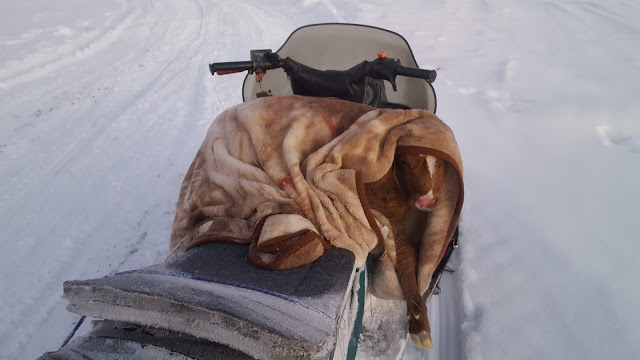 This is our first wee fella, born much earlier than expected.  Luckily mum spotted his momma starting to calve when she was feeding.  We snuck her in to the hay yard and waited until she finished the birth and had a few short minutes to clean him off.  The wind was howling and it was about -15.  I took him back to the house, got him good and warm and fed him some colostrum.  Once relatively dry, I snuggled him in the blanket as shown and we rode the snowmobile back down the meadow to his mother.  He was super happy to look for some breakfast, but quickly started to freeze up again (temperature was dropping fast), so I wrapped him up and took him back in to the house for the night.  The cats were utterly disgusted, especially when he got free of his makeshift pen and walked into the kitchen while we were making breakfast.

All right folks, speaking of my bed....it's time.  Never know when the next full nights sleep will happen.

There and back again

Well, the Hatch family has safely returned home.  And home sweet home, it is.  (Despite the fact that it was -31 last time I checked and still dropping.....)

I won't go in to all of the details as I do have to get some sleep tonight, but I will touch on a few major points.

We went to Disneyland.  That was cool for the kids for sure.  Not positive it was ever on my bucket list, but it is now surely off.  Perhaps the best part is that it was raining buckets both of the full days we were there.  Some may consider that bad luck.....we considered it PERFECT.  Because there were virtually no line ups at all and we did all our favorite rides at least twice.  We went with Eli's sister and family, and that was also a huge part of the success of the time spend.  They have gone several times and know all the 'in's and out's', best rides, places to eat etc.  All in all, it was good fun.

Then off to much more my style of holiday.  We had rented an airbnb home about 3 hours from Los Angeles.  Oh, should I get in to a traffic report about that city?  Ugh, no....let's not.

Anyhow, the home we stayed in had plenty of room for everyone (9 for a couple of nights) and we enjoyed cooking for ourselves.  The area is absolutely fantastic and literally impossible to describe.  I'm pretty sure that only had we landed on the moon, would it have been more opposite from our home.  We spend several days in the Joshua Tree Park and I would highly recommend it.  The rock formations are incredibly cool and fun to hike around in.  The climate wasn't super warm (they were having a 'cold spell'), but it was pleasant enough.  As an added bonus, the rains really got the desert blooming.  Perfect all around. 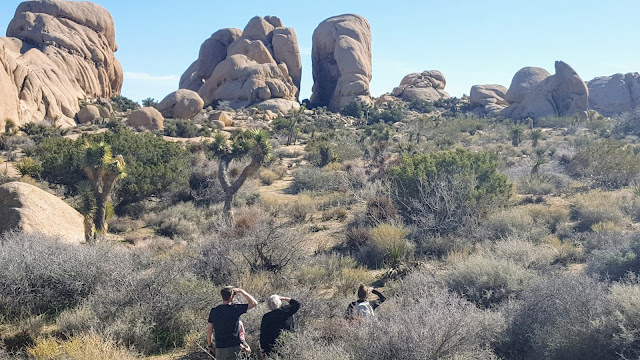 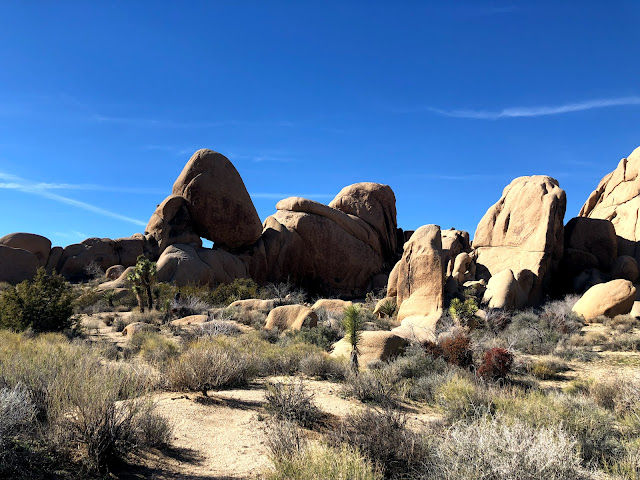 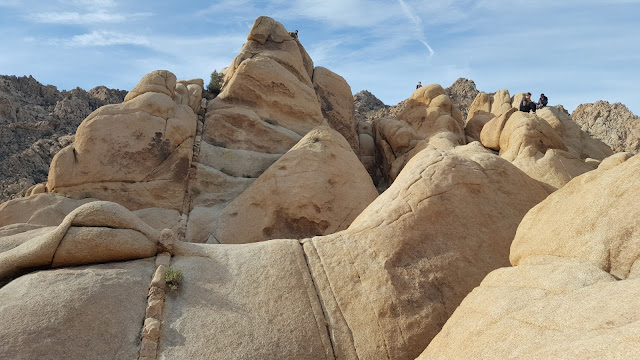 These photos are all from the Joshua Tree Park.  Such an incredible place. 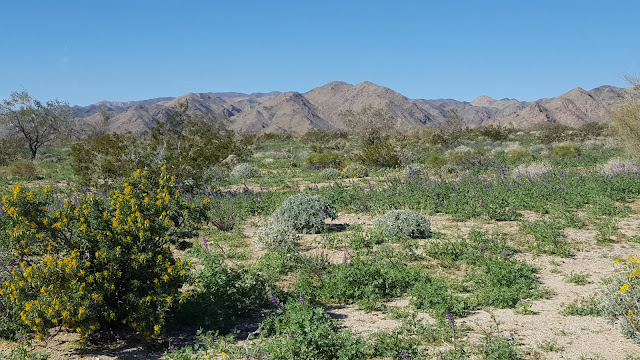 The desert began to bloom..... 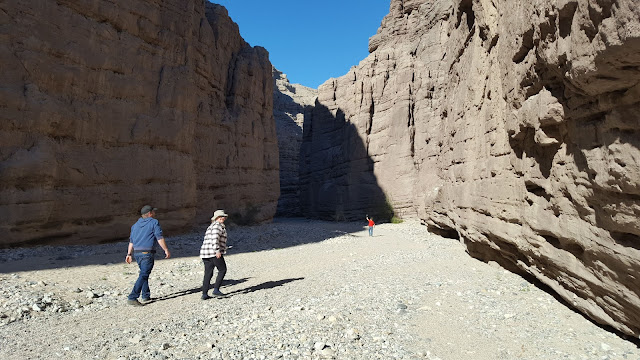 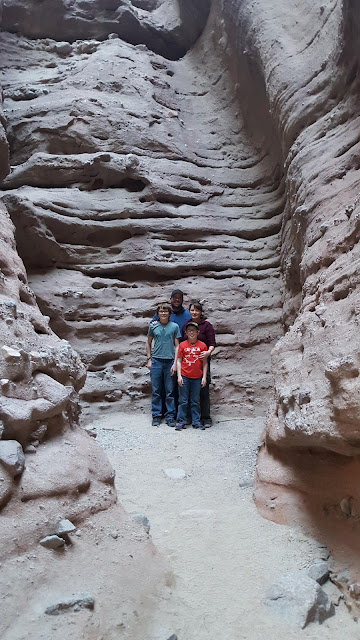 The Ladder Canyon Hike.  You literally used ladders to crawl up through the rocks and walk along through narrow paths cut and carved through the centuries by water.
Probably the most unique place I've ever visited. 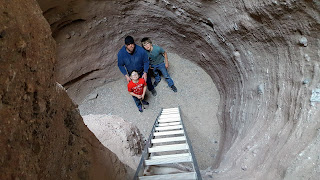 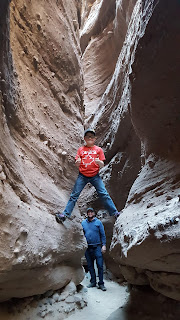 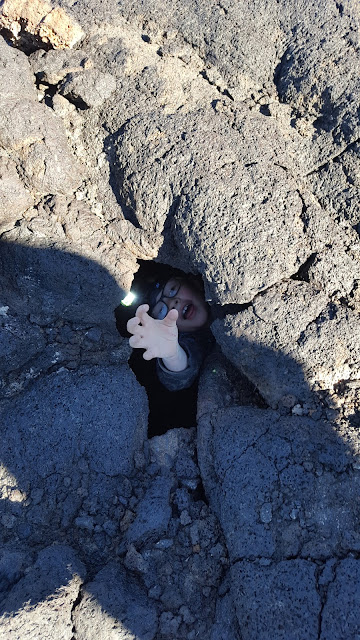 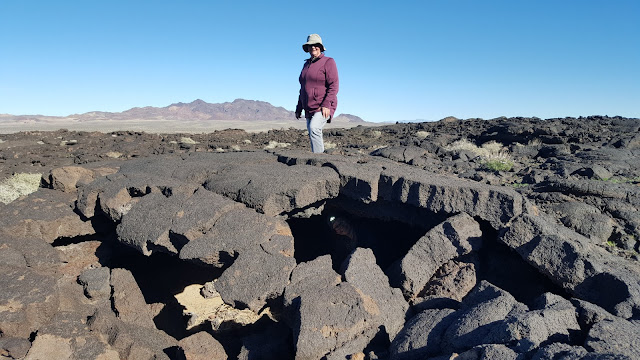 We were fortunate to have our good friend Cheryl join us for part of our trip.  Do you see a smiling face underneath her? 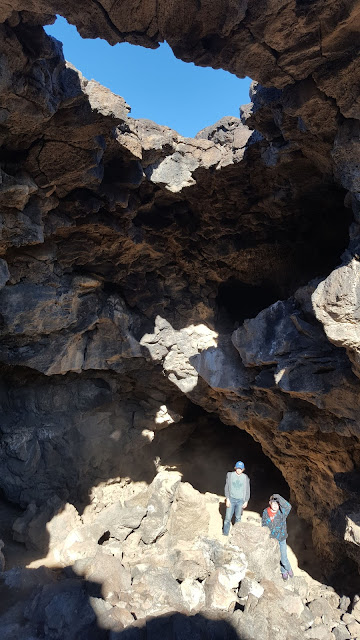 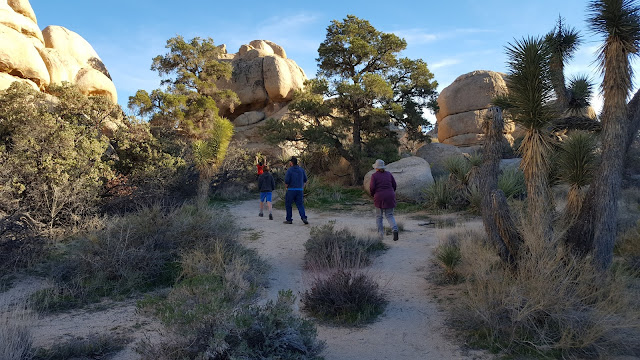 Another hike in the Joshua Tree Park. 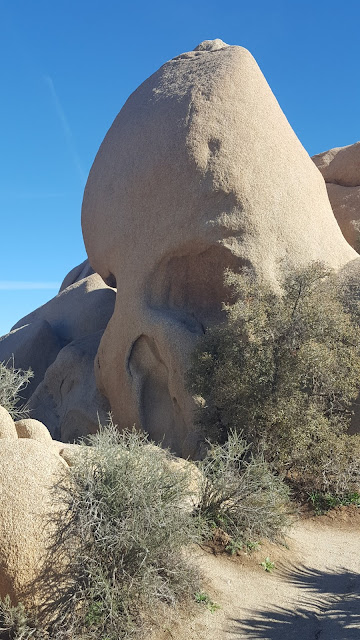 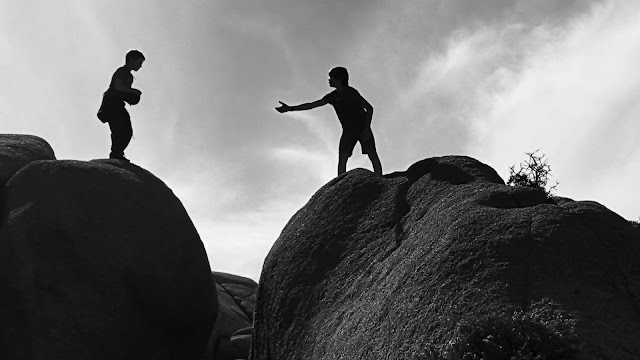 Love this photo!  I had to turn it black and white as it was zoomed in and not clear, but the effect is great. 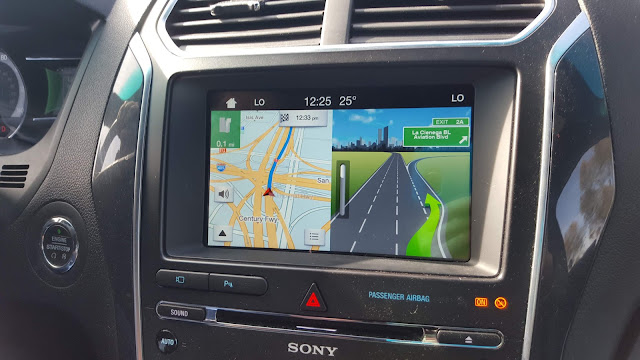 Heading back in to Los Angeles.  LOOK at all the freeways we were navigating.  When I say 'we', I mean "Eli....."
Thankfully the car rental guy took pity on us and gave us a vehicle with a navigation system. 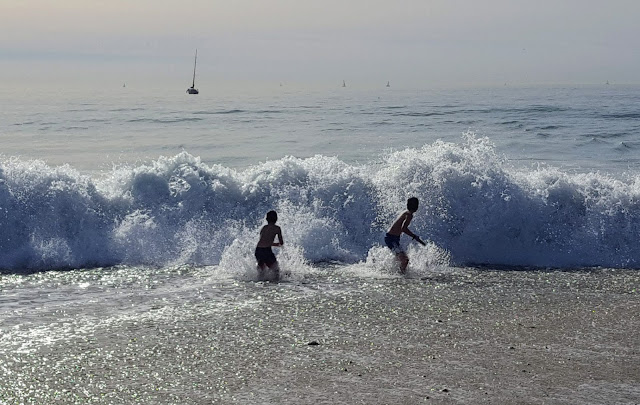 Visited a huge beach not that far from our hotel.  Plenty of people there, but only two Chilcotin boys actually out playing in the waves!!
The air was warm, but the water was dang cold.

So our story turns here a bit.  To shorten it up, we managed to get Ben's eye specialist appointment changed to somewhat coincide with the end of our trip.  So he and I skipped the last plane and stayed near Vancouver, mostly visiting friends we've met through trail riding.  To shorten another long story, the 2nd specialist we saw decided to do the necessary surgery as soon as possible.  Great because it meant 'two birds with one stone', but not so cool as we were both starting to really chomp at the bit to get home.  But all good.  Some more lovely visits to family/friends I wouldn't normally get to visit and I think I'm finally getting the Skytrain, Bus and Ferry system figured out.
(Sorry to those I didn't touch base with...your turn to get dropped in on next time.....!) 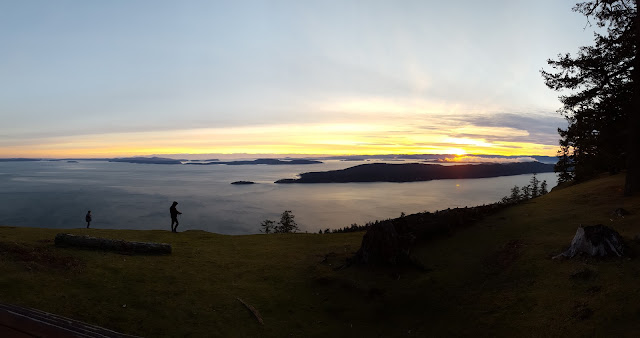 I have to say, the people of Vancouver and area were all great, from the bus drivers to the waitresses to the RCMP (one member bought Ben a donut and wished him the best of luck for his surgery), to the nurses etc.  Not a cranky face to be found and everyone was super helpful.  And of course the Childrens Hospital was amazing, as always.  And very humbling.  Feeling whiny about a quick day surgery or not being home when you thought you should, gets put in to perspective pretty quick when you are there and seeing what other families are going through.
Ben was a champion through the surgery, had an excellent follow up appointment and very nearly a MONTH after leaving the ranch, we happily arrived home again, jiggidy jig.

It's been an amazing adventure, but I'm quite certain we are now right back where we belong. 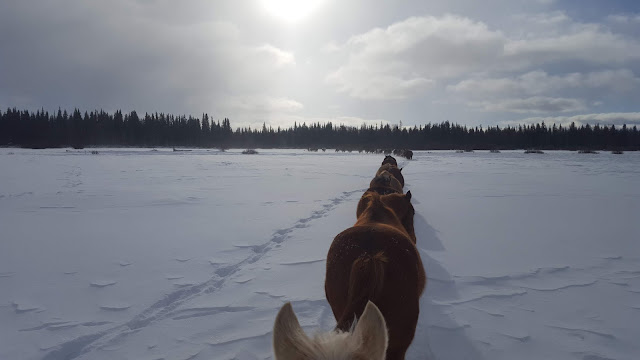 Moving horses to 'greener pastures'.
Not gonna lie, it was a chilly ride but I was still grinning from ear to ear (under my scarf!) to be looking between equine ears again.