Remember the post I wrote a while ago, about the rancher I met at the Stockyards, whose comment about ranching being the 'most hopeful business in the world'?  Hoping the weather improves, hoping the market holds, hoping that calf nursed, hoping that old cranky cow calves on her own.....  The comment still makes me chuckle.  I recently had to set up a new account for the combined ranches and, when asked what name to put it under, I honestly thought about telling the secretary "Combined Hope Ranching". 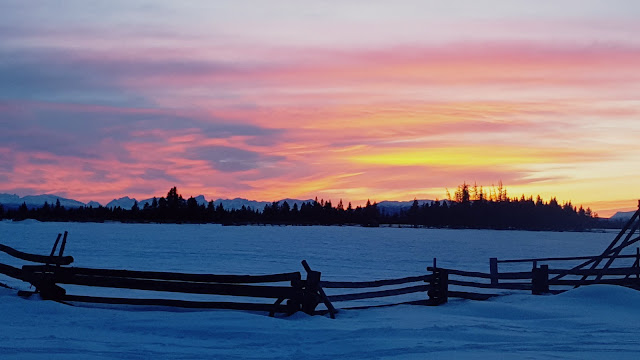 Hopeful has to go hand in hand with 'try'.   When being hopeful doesn't work out (which so often happens), you best have a Plan B, all the way to F or G.  That generally starts with "Okay then, dang it, let's try......"

So our calving season has begun, as you may have guessed.  The weather has been less than cooperative (so much for being hopeful there!) and it is more like late January than almost mid March.  Well, I shouldn't say that, the last couple of days have been absolutely gorgeous.  It has seemed over the winter that when it warms up a bit, it snows.  Snow clears and it is beautiful, but teeth gritting cold. 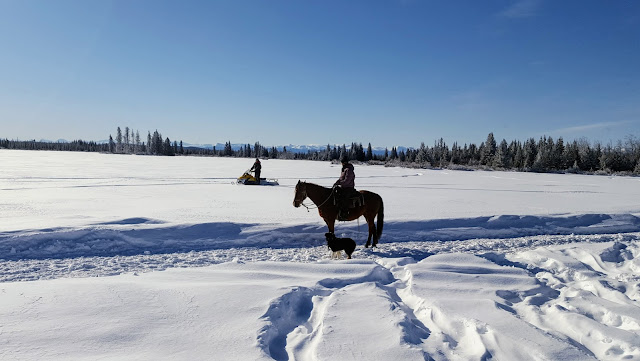 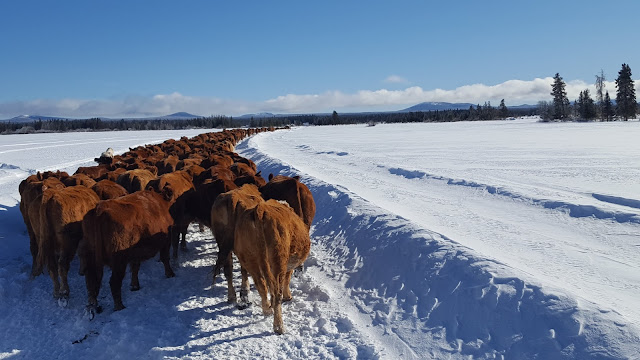 Our calving season has come on slowly.  We turned our bulls out later this year, and between that and our cows being in less than stellar condition last spring, we are pretty slow getting going.  But they are pregnant and the flood of babies is coming!  The cows are in good shape this year overall, and I'm sure 'hoping' to have a good season.

It didn't start out that way, with only 1 out of the first 3 surviving.  But thank all that is good that the one that did survive (and thrive) is Jackson's one and only calf.  Grandma gave him his own heifer this spring and he is very proud of her and her little steer calf. 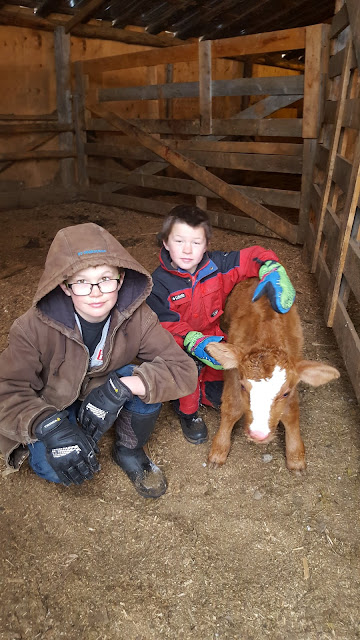 The first calf that didn't make it was simply born dead, as far as we could tell.  Certainly there was no indication of anything going amiss, besides lack of heart beat.  Eli and Jackson had gone to check on her in the barn and found the calf still lying with feet inside momma, dead as can be.  But you gotta try......they ran in and rubbed and rubbed the calf, puffing air into its lungs and hoped and hoped.  But it was well and truly gone.
The next calf had a leg back, and looked weirdly puffy.  We easily re positioned the baby and helped momma deliver.  He was hard to get breathing and just wasn't right from the beginning.  The calf continued to puff up and go downhill, and even though we used all means possible, died a few hours later.  (Our autopsy showed an abnormally large heart....) 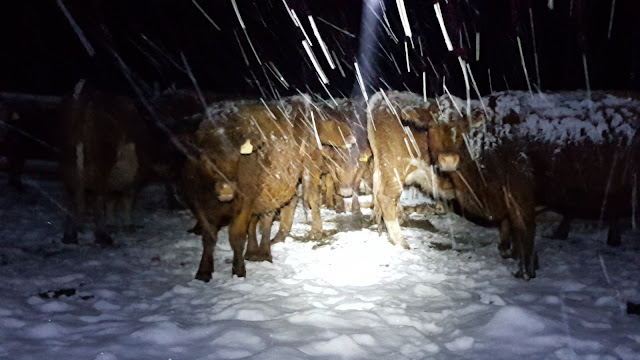 2am check when hoping for better weather didn't work out. An opportunity to try and remember why you wanted to be a rancher in the first place!

The next momma to be was brought in and a wee tiny baby easily delivered unassisted.  I figured right away that there was a #2 in there, and sure enough, momma laid back down and went to work again, already licking and talking to #1 staggering around the pen.  She was straining too hard and taking too long and sure enough, #2 was trying to enter the world ears first, rather than feet and nose.  She was easy enough to re position and then nearly landed in my arms with the next contraction.

So the heifer whose calf had died with heart issues was still wanting her baby and bawling by the barn door.  Knowing it's worth a try, I took the 2nd twin directly to her old pen (without the original momma licking it) and let the sad heifer back in.  She was absolutely delighted with her now active baby and chuckled and chatted away constantly as she licked her shiny as can be.  We made sure both twins got adequate colostrum and everyone was happy.  I actually had to turn the heifer out of the pen unless someone was watching for the first day.  She kept tucking the wee one into her chest with her head and then trying to lay down with it.  Great theory to keep it safe, absolutely terrible in practice when the calf isn't mobile enough to stay out from under her and the chances of being crushed to death are extremely high. 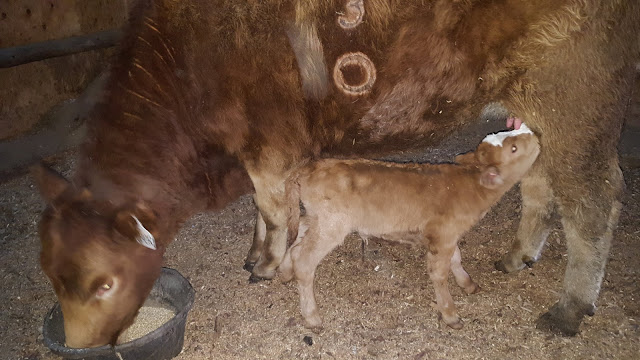 The photo hardly does her justice but this wee twin easily walks under her long legged mommas belly and imitates a giraffe to nurse.  This is #2, delightedly accepted by the sad momma who lost her own baby.


Despite hoping we were over our bad luck, Eli found a calf pretty much frozen in the pens.  He picked it up and ran for the hot box, positive it was much too late,  But you have to try.  With the propane heat slowly warming it up, warm colostrum in his belly, a pain killer administered and a whole lotta hoping, he amazingly did come around, although it took all night.  Unfortunately, the cold seemed to have froze the sucking mechanism right out of him, so that was certainly an issue.  I actually think he was premature as well.  He would get up and wander around, but suck?  No certainly will not thank you anyhow I think I'll just starve but thanks anyhow leave me alone nope I don't want any I don't know what you are doing but I'm too smart for that trick no way notta chance.  But we had to try, and try and try.  So now it's been nearly a week of trying.....momma, the bottle and the stomach tube when nothing else works.  Magalie has been getting him out in the sun and who knows if it helped or not, or maybe it was the lamb nipple we tried yesterday afternoon, but miracle of miracles, he nursed the bottle and then his momma!  Hurrah and a fist pump!  Nice when all that trying and hoping pays off. 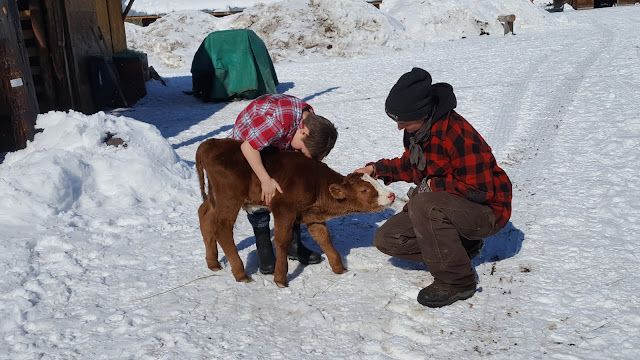 Ben and Magalie giving "Frozen" some love and sunshine.
(Look at the snowbanks!  It's MARCH!)

In overall news, since these stories, we have had plenty of calves who are happy and healthy with no issues at all.  I did want to share these however, maybe just to point out that life on the ranch is not all bouncy calves in the sunshine and riding into sunsets.  Trust me, the romance wears off quickly at 2am with a lineup of issues to deal with.  But you never stop hoping, or trying.  Sometimes you are just trying to keep your hopes up! 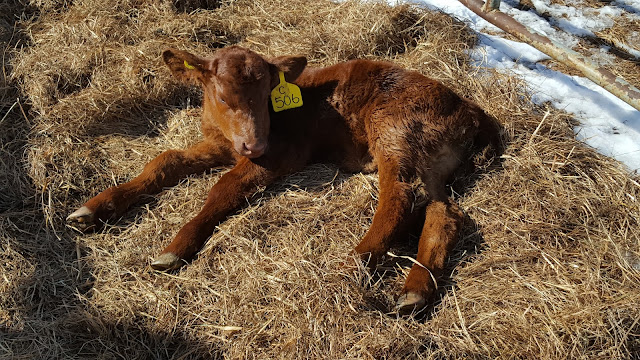 How do these posts get so long?
I was just going to post a few photos and now here I am, almost late for my next check.
So as calving ramps up, I will still post, but likely more photos than stories.....as was my intention tonight.  haha
Best run,
Punky

Oh, but I have to share a laugh with you.  After each check at night, we write in "The Book" so the next person knows what is going on.  Some choose to write the very bare basics, some are a bit more detailed.
This is from last year.....  made me grin out loud again! 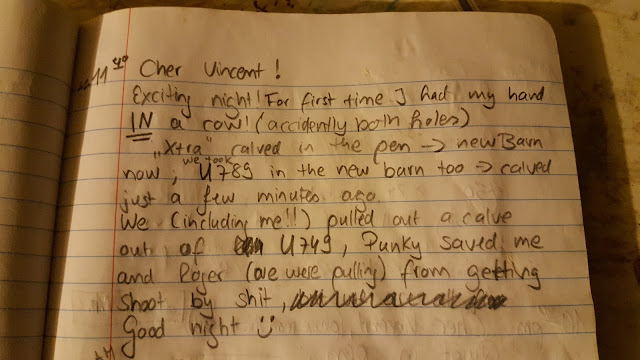