On the Front Page 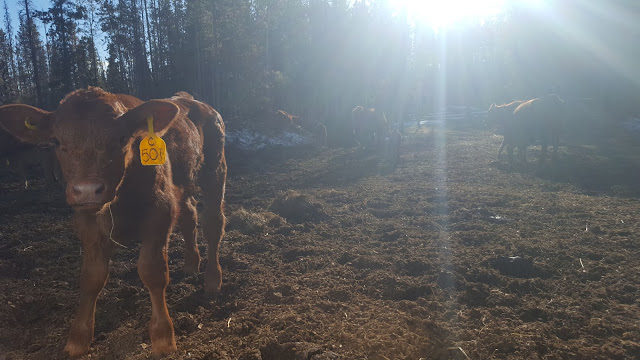 I haven't left the ranch for weeks, literally.  Calving came on hard and fast this year (yay!) and there was time for nothing else.  More on that later.  Then came a meeting notice (via Facebook) regarding caribou management in BC and I happened to need to renew my drivers license.  The calving had slowed so in to Williams Lake I zipped (a mere 3.5 hour drive......) A quick (and always expensive) run around afternoon and then the meeting started at 5:30.  It was an interesting meeting, informative and frustrating, and the topic has certainly has generated some heated conversations all through BC.
A couple days later, I'm on the front page of the local newspaper and mum and I were both quoted.  Yuck, no where I want to be.
This is the resulting letter.

I recently attended the Caribou Recovery meeting in Williams Lake (along with several hundred other people), but have found myself quoted and on the front page of the Tribune.  I’m generally a low profile kind of person and public speaking is not my forte.  I’d prefer to tell my own story however, rather than be quoted without the context maybe being clear.
I first want to comment about the poor prior notice of both the meeting and intentions of the meeting.  Having two businesses that we run out of the Itcha Ilgatchuz Park (guide outfitting and trail riding), having range tenure in the immediate area, being a director of the Anahim Lake Community Association, member of the Anahim Lake Round Table and secretary of the Anahim Lake Cattlemens, one might think that a notice of meeting might have made it my way.  But no, I found out on Facebook.  Along with the frantically “shared” announcement of the meeting were many comments, mainly the general public panicking about what kind of new restrictions and closures were going to be announced and what that would mean for both recreation and industry.  People were (and are) spooked and angry, and rightfully so.

Needless to say the cliché talk at the meeting of “collaboration with local government and stakeholders” was not well received and there was more than one horse type snort in the crowd.  Perhaps the meeting was better announced on government websites…..oh but never mind….our own Caribou Chilcotin Park Supervisor didn’t know about the meeting until the Friday before.  Clearly there needs to be some more work on the whole “collaboration and transparency” piece.
I also want to clearly point out the wealth of knowledge available from people who have or currently are living on the land.  (And not everyone has Facebook.)  I realize the information is ‘anecdotal’, but it is very relevant.  The history that has been passed down and been lived is interesting and important, especially since any official studies and statistics from this area (and much of Canada) are relatively recent.  This cannot be stressed enough.  Local knowledge should be sought out, not brushed by or ignored all together.
What I write now is in regard to my own experiences in the Itcha Ilgatchuz Park region as a third generation rancher, mountain trail riding guide/packer and big game guide outfitter.  I cannot speak of other places where the herds are threatened and I would hope the government will look at each area individually, and LISTEN to the residents, rather than blanket us all with new policy.

When I was a kid growing up out here, there were 120 plus students in the school.  There were many small holdings in the area, just big enough to support a family.  Most everyone, including First Nations people, had a few cows, plenty of horses to get around and make hay with, trapped through the winter and often guided in the fall.  People lived off the land because there was no choice, and made do with what they had (which often wasn’t much).  Everyone ate moose meat and caribou.  And there were plenty of them.  It was usual to see 40 to 60 moose and that was just in our main hay yard, not even the neighbors.  In the mountains, we got so used to seeing hundreds of caribou as we rode through, we’d hardly bother to stop.  What there wasn’t lots of, was wolves.  A wolf control program was in place.  And to a trapper or hunter, wolf pelts were prized and was worth good money.  There were still wolves around but they were shy and rarely made a presence.

So now our human population is way down, with less than 40 kids in the school.  Although we have our share of ‘feral horses’, the numbers are actually down from the working herds that once were common.  Very few people live ‘out in the bush’.  Bigger ranches have taken over the smaller holdings, but the actual cattle numbers are similar.  There is next to no trapping done anymore and of course the guiding outfitting is essentially gone too.  Caribou hunting has recently been shut down all together (although even the experts agree that harvesting the mature bulls per regulated guidelines makes zero impact to the larger herd).  Moose are becoming a rarity and many people having given up hunting all together.  We have fewer snowmobilers than ever before and these days we can ride endlessly in the Itcha Ilgatchuz Park and area and not see another human or horse track.  Increased human presence is not one of the local challenges.

What we have seen is a steady increase in wolf sign, remains of wolf kills and literally wolves everywhere, including in my back yard.  At the meeting, someone made some very interesting comments about humans hunting wolves throughout history and thereby helping to control numbers.  He is correct.  As human pressure on them has decreased, so their numbers have increased, and quickly. They are a very efficient and effective killer, and are thriving in this new world where they are king.  The same can be said for the grizzly bear, but we are not going there this time.
So in the near past, with the wolves under control via a program and human pressure, the moose and caribou flourished.  With no control program, easier access and little human pressure, the wolves have thrived and moose and caribou numbers have dropped accordingly and alarmingly.  I’m sorry folks, but it’s hard not to understand that math.  I’m well aware that there are other underlying issues, some we may not even know about yet.  But the basic facts ring loud and true.
Now don’t get me wrong in this, trust me, I’m the original bleeding heart, often to the disgust of my family.  Who else do you know that nurses coyotes back to health, or relocates baby beavers?  But even I can figure out that the cold hard reality means reducing wolf numbers and regulating predators in general.

Because what other “changes, restrictions or closures” can be done out here, with already a smaller population and much less individual human activity on the land for both recreation and living?  Certainly there is local impact from the pine beetle epidemic and fires. Certainly, logging and subsequent lack of road closures have made big changes in many areas, increasing access where there was once none.  Thoughtful land use planning is essential for multiple reasons.  However, there is still plenty of excellent habitat and protected areas here, and our numbers continue to drop.

Controlling the wolf population DOES make a difference for the caribou and moose populations.  This has been proven by both history and science.  While I realize and appreciate that it is unpopular and may not be the ideal single long term plan, it is what needs to be followed up on first, while we still have something to protect.
And that is the point I was trying to get across with my bumbling and mumbling at the meeting. :)
Terra Hatch

So there you have it.  My opinion, for what it is worth.

On the homefront, we are looking at the tail end (no pun intended...) of our calving season.  Overall (knock on wood), it has been a good one.  Cows and calves are healthy and happy and we have had good luck in general.  I'll get back to you with a story or two in the near future.

The best to you all,
Punky 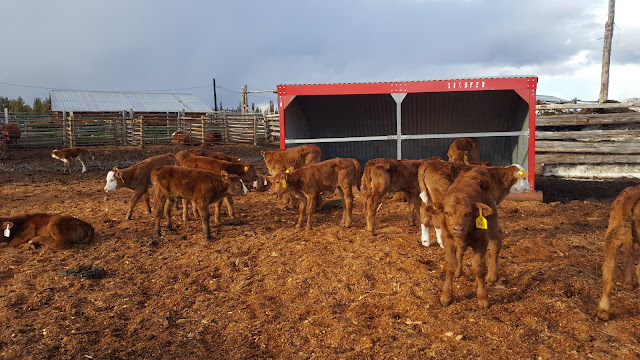