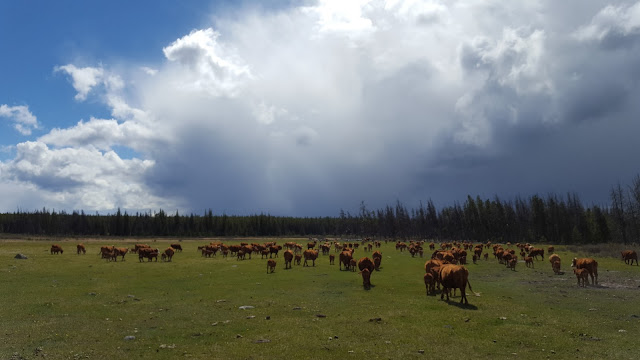 Earlier this spring.  This was absolutely wild.  It went from beautifully warm to crazy winds and rain within minutes.   Dead timber is not a safe place to ride and I saw, heard and was close to way too many trees falling.  I ended up abandoning the herd to stick to the open country.


Well, green grass and sunshine have finally arrived.  It's wonderful  and what a treat to really get out riding consistently again.   Many many range miles on my saddle already this spring, but I am sure not complaining.  The country is finally beginning to dry out after last years non stop rain and it's an appreciated pleasure.

Not so appreciated is the run of bad luck we are on with our cows and calves.  We have worked harder and less successfully to keep the last fifty head of calves alive, than the whole rest of the herd.  I agree with our vet that part of the problem is just lack of quality feed from last year.  Our cows are just not producing the colostrum they should (and usually do) and the calves are loosing the battle.  It's incredibly frustrating.  But it is not just calves, we are losing cows as well.  Between freak accidents (getting themselves tipped onto their back and can't right up kills them quickly) and being beat to death by bears, it is a depressing scene.   Sitting on a big meadow with three large dead animals scattered within sight is worth a few words no mother would approve of and if a tear leaked out, no one would comment.  (In that particular case, two cows had been killed by a bear (or likely bears) and we had to shoot a young bull that broken his leg.  A bad day.) 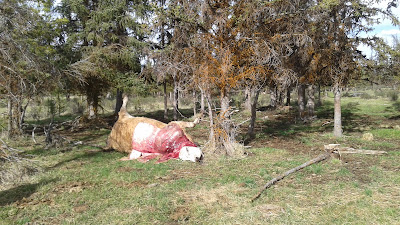 One of the dead cows I found that day.  Note the bruising over the head, neck and shoulders  (Eli skinned it back.)  That's typical bear.

But I didn't finally get back on my computer to drag down your day.  I've got a good story to tell. 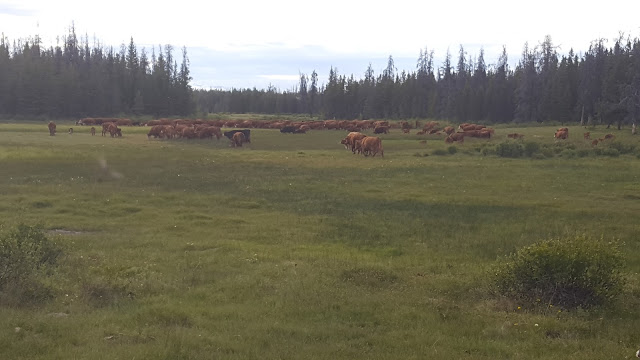 Moved a group to another part of the range late last evening.  They were very happy with their fresh menu.


I won't go into our morning in detail as it was again, not that fun.  Despite calls to the vet, IVing and medication, we had lost another calf.  The day goes on.

Eli had realized that we had a herd of cows on one of our meadows so mum and I changed our range riding plan and headed up to get them out and move them to another pasture.  The irrigation is on, so everything is still super wet and muddy (but growing well!).  We found the cows, about 40 head, smugly camped on the side of the 2 Mile Meadow.  We did a very brief head count and started moving them back down towards the ranch.  For some reason, mum headed out around a big peninsula of brush and I suddenly heard her urgently calling me.  Fully expecting the worse, my horse and I flailed through the mud to get to where I had heard her voice.   I could not believe my eyes at what she had found.
One of our cows (Uzima....don't judge me, "u" names are tough to find!) had displayed her intelligence by lying on the very top of a root mass, about big enough to stand on.  Of course, nature and gravity took over and she rolled backwards, upside down into a big hole, with the root mass on one side and a spruce tree on the other.  As I mentioned earlier, cows don't live long while on their backs.  They start to bloat almost instantly and generally if you can't get them sat back up very quickly, they die.  But for whatever reason, this old gal was STILL ALIVE!  I guess she was on her side enough to keep from bloating up too badly.  But of course there was no chance of getting her feet under her and she had pretty much beat herself half to death trying.  The bottom side of her head was huge and swollen, she couldn't see out of that eye at all, her legs were rubbed raw and she had rubbed almost all the hair off her body.  Not a pretty sight, let me tell you. 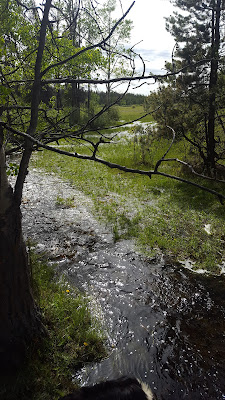 By the time I got there, mum had the halter off of her horse, and we put it on the cow.  I added my halter shank to hers, tightened the heck out of my cinch and thanked the stars I was riding my big Kegger horse instead of a colt.  He is well accustomed to working a rope and leaned right back and pulled the cow right around and upright, somewhat on to the root mass.  I gave some slack (which I shouldn't have) and she flung her head back and flipped herself right over backwards the other way.  Seriously.  So Kegger and I quickly wiggled and juggled our way to another position, between the mud, roots, trees and windfall, and got another hold.  This time I did a better job and we got her sat properly upright.  Poor old girl!  We watched her for quite some time, but she was just too weak and disoriented to get up.  The only thing to do was to let her take her time and cross our fingers.  There was no real way to get a tractor close enough to help her, or really anything we could have done if she couldn't walk out under her own power.  Not a good feeling. 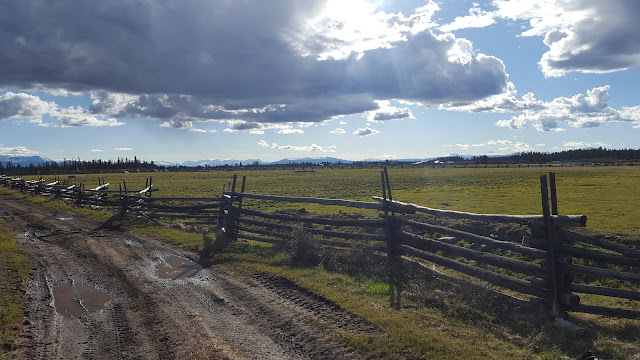 The road was terrible this spring (of course) and Eli has been busy building it up and ditching.  So we either rode a quad or horseback back and forth between our place here at Five Mile and up to the main center of operations at Six Mile.  My horses are getting extra miles and I'm not complaining.  No time was ever ill-spent from the back of a horse!  And I must have 60 similar pictures of this general view.  Of course the photos don't do justice, but I'm still impressed every time I turn the corner. 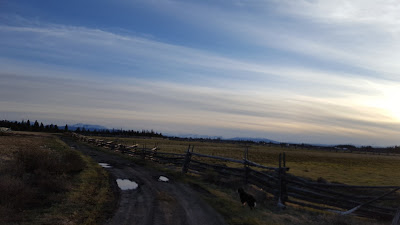 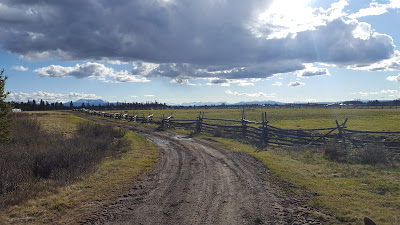 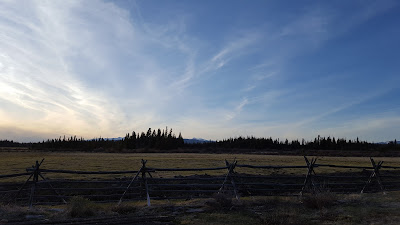 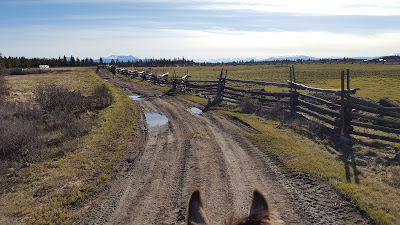 The next morning, to the amazement of everyone, Uzima was up and standing and quite cranky.  (Can't imagine why she'd be cranky......)  Such a great relief, especially with all the signs pointing at pretty much certain death.
She had been in that position long enough (had to be a couple of days!) that her calf had actually given up on her and basically was weaned off.  After hearing she was alive, I grabbed it and another pair to take back up there.  (We had left the herd in a nearby pasture just in case this might be an option.)  It was a real struggle as the calf had no interest in going back at all and the terrain is less than friendly, but we did eventually make it.  Thankfully I had my trusty Riley horse, what a champ he is.  Anyhow, the story ends well.   The appearance of her calf seemed to totally rejuvenate the old gal and she immediately left the shelter of the trees and started eating.  My original thought was to just leave her there to gather strength again but she quite determinedly staggered about until she got her marbles gathered and then marched down the road to join the rest of the herd.   We just moved that group today (we left her in the pasture) and she is not quite 100%, but doing well and happy to be alive.  I'm still amazed and am hoping that will start our streak of good luck! 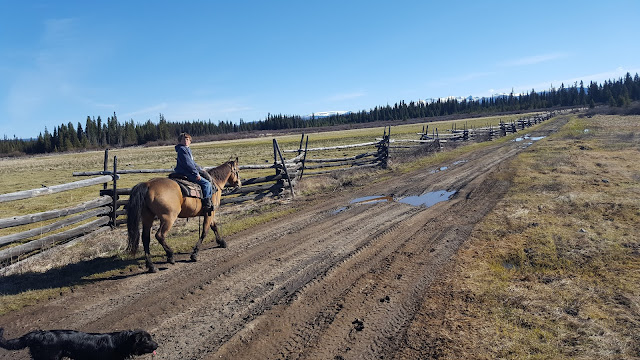 It's not a great photo, but I love it.  Does my heart good to see Jackson riding my champion Riley!  I'm not totally positive they are ready for each other, but the smile on both their faces is awesome to see!  Note my Huntaway cross pup, Brady.  She is finally figuring out how to put one foot in front of the other without tripping!  But a sweeter dog you won't find anywhere...

Just to be clear, it is not all doom and gloom!  We've recently had a great family reunion, Jackson won the most Sportsmanlike trophy at a Steer Riding School (that was terrifying) and we are headed out to my nephew's grad this weekend.  The sun is shining, the grass is growing, the cows are very happy and we have our health to be thankful for.  There are lots of great things on the go (our road is almost drivable!) and plenty to come.  And did I mention how much I am enjoying the riding?! 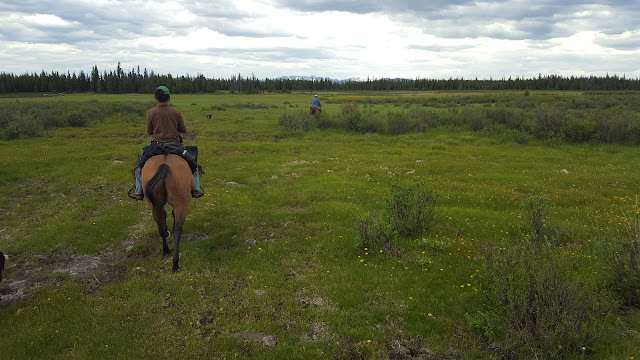 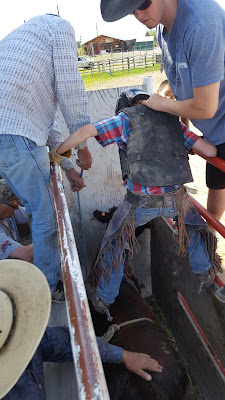 This was truly terrifying!  He seems so little to climb on a cow or steer!  He did amazingly though, all weekend.   His "most sportsmanlike" trophy and medal are on proud display.   I hope what he got from it was to never ever do it again! 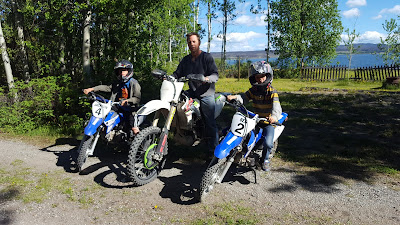 Posing for a photo with their new bikes.....
Thanks Uncle Troy!