Some favorite photos from the summer

Hey all!
Well, not much new to report on the ranch.  The fall has been nice, but oddly warm and wet.  The horses have all had their shoes pulled and are happily out on fall pasture.  The foals (just two of them this year) have been weaned and are living with their dad now, close to the ranch.  The calves have long quit missing their mommas as well and have settled in to their routines.  My kids are super annoyed that the creek isn't frozen enough to skate on yet, but the cows are happy, so all is well.  The kids have plenty of time to skate yet....  We are also fair in to homeschooling again, trying to hit it as hard as possible while the going is good.  (Which is right up to when calving season hits!)

It seems I've been spending more than my fair time on the computer trying to get caught up with all the bits and pieces that get shoved back over the busier seasons.  I usually can find plenty of other things to do, but my preferred outside jobs are getting a bit scarce, so not much excuse to not sit in my desk seat.  Yuck.

I did come across an email that one of my trail riding friends had sent me, so being easily distracted, I went through her photos and am going to post a few favorites.  And then of course I had to go through my own summer ones, so I'll have to share a couple of them as well. 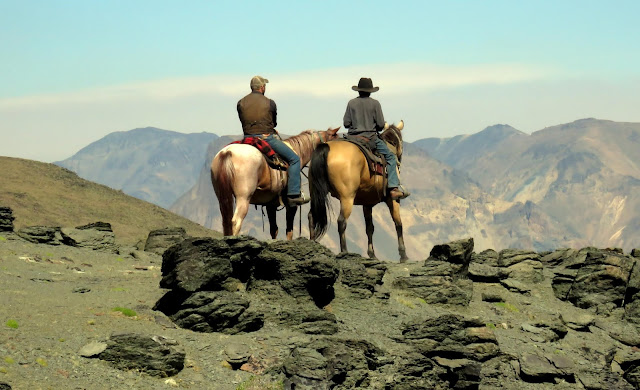 Love this one of Cody and Jackson. 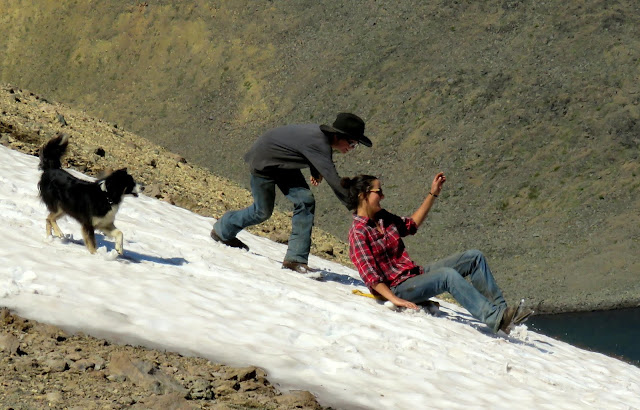 Jackson trying to get some speed built up for Magalie. 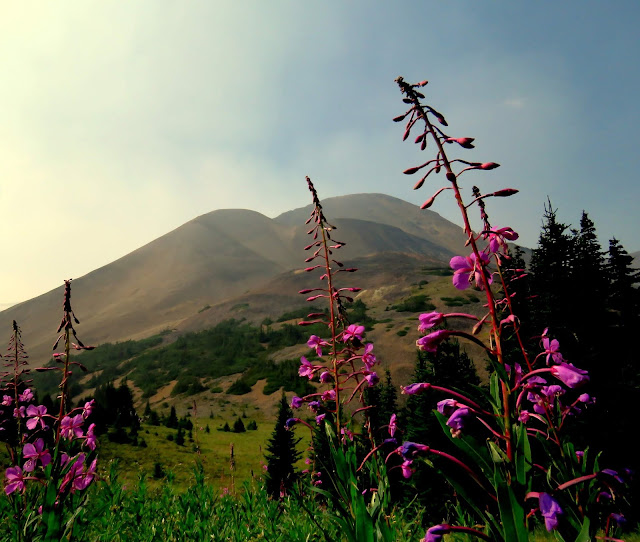 Bit of smoke, but still beautiful. 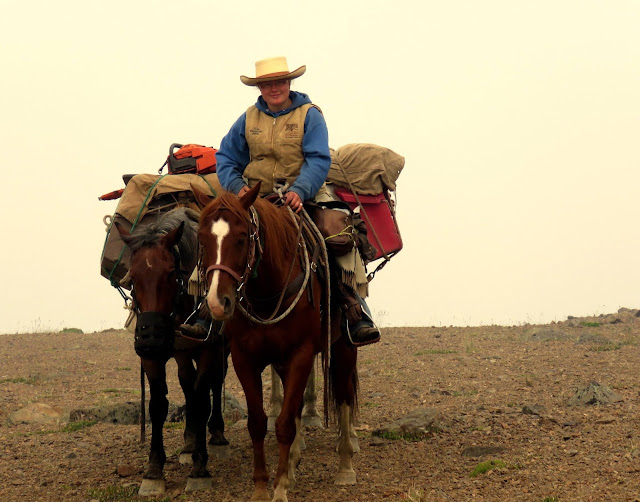 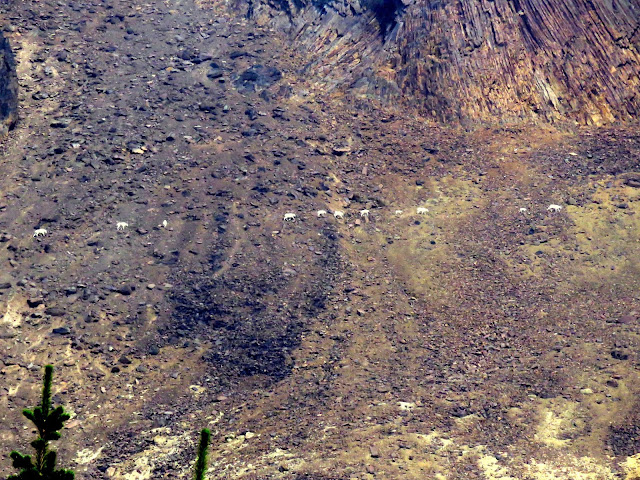 Plenty of goats to watch over lunch time. 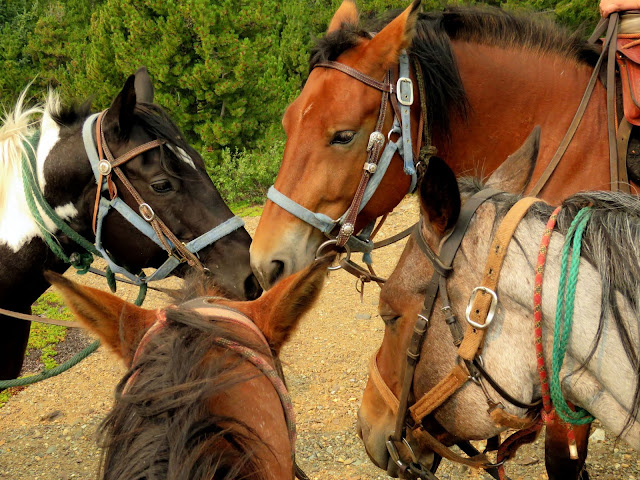 Meeting of the minds.  Tally appears to be napping. 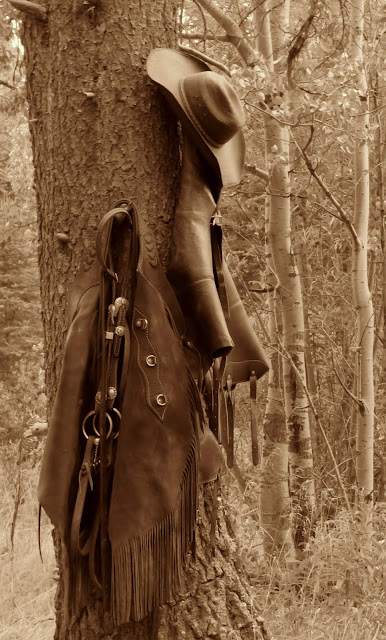 All Above Photo Credits to Lisa H.  :) 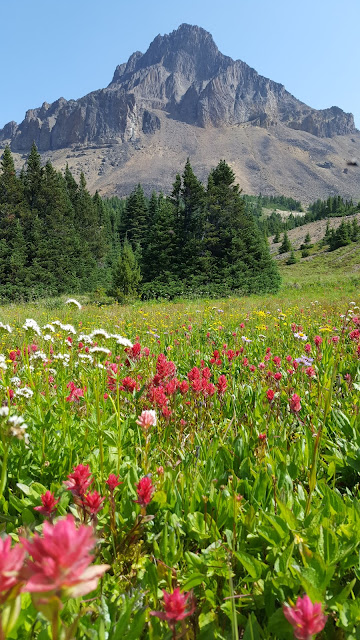 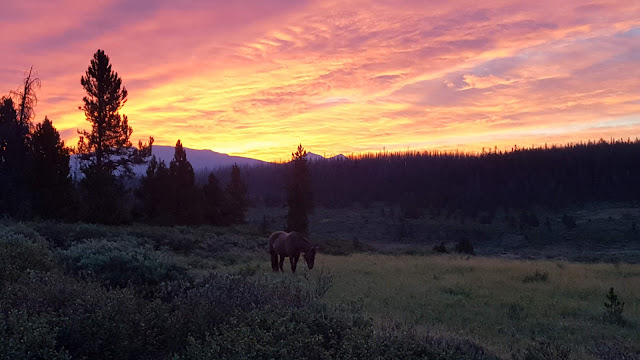 Checking on the picket horses at sunrise. 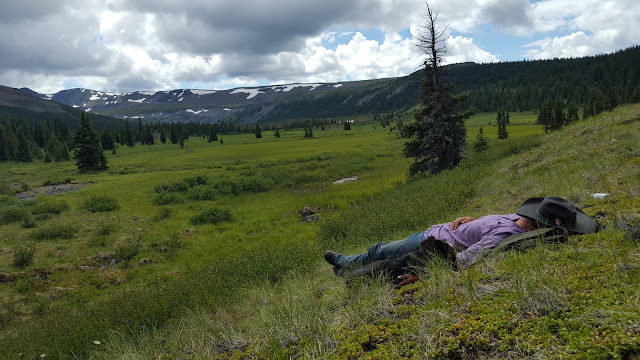 Tough day at the office. 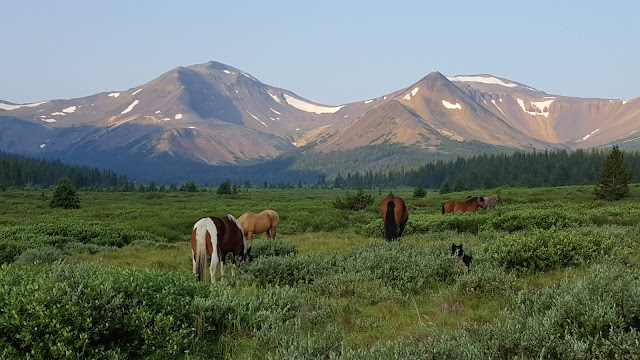 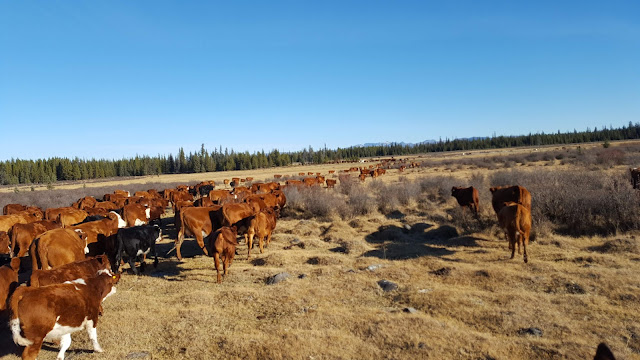 It's been a good fall.  September was pretty nasty, as many Canadians will testify to, but October has been beautiful.  Our fall round up went very well overall and many lovely miles were enjoyed looking for the ever elusive last few bovines.  We are still missing a handful, and several of them are probably dead, but a few more will straggle in with the next snow storm.  The wolves appear to have been less aggressive than in the past (but we still doctored our share, found several with healed wounds and of course there are the cows and calves that we will never see again.) 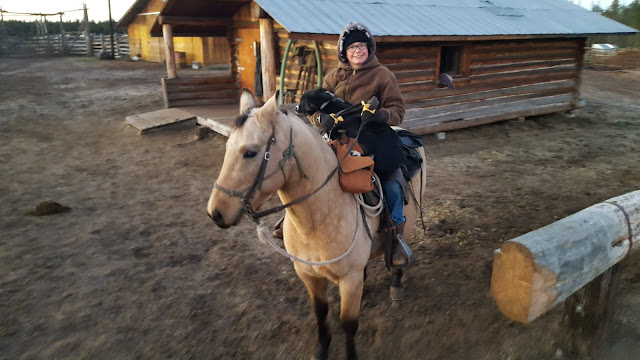 My brother in law gave us his older drone, and we had some fun with it late this fall.  It is actually super handy to check all those little nasty spots where cows tend to get hung up and can't get home.  We never did find any cows with it, but might have!  The flying range is not too far, and of course I'm super nervous about losing it, but so far so good.  I just get Jackson to take off and land it....I take over when it's time to find those certain areas.  Jackson also took some videos that we are working to compile and if it turns out okay, I'll post it for you to see.  Unfortunately the videos of us sorting cattle and loading trucks are jumpy and glitchy, but we will see what we can pull together.  I've just discovered how to pull a photo from the videos, so I'll add a couple. 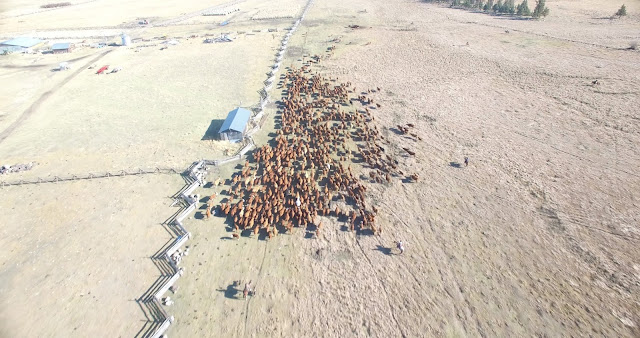 Moving the some of the herd from Five Mile to Six Mile for sorting and shipping. 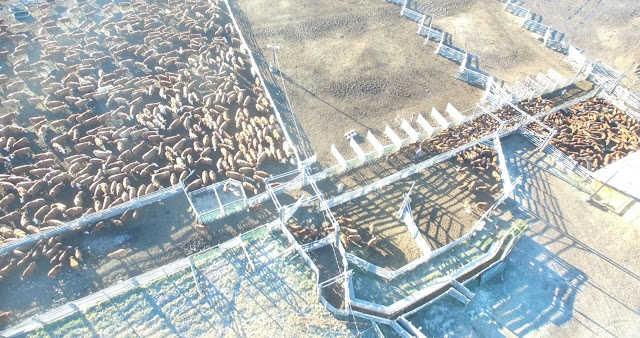 We sorting steers from heifers in this photo.  The main alleyway is being worked from both ends.  Cows had already been sorted off of their calves earlier in the morning and are now in the top left corner. 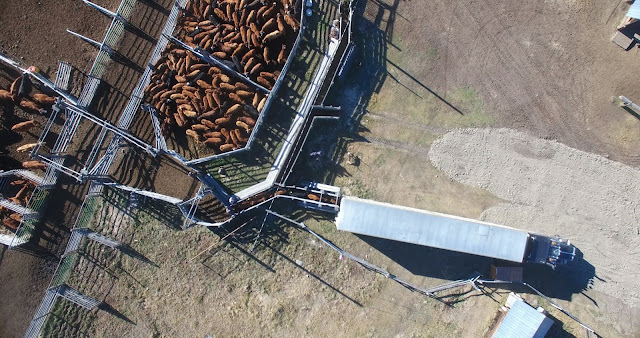 Loading steers in to the big trucks.
Our calves sold fairly well.  A person always hopes for better prices, but after ranching though the BSE period, we are happy with what we got!  It's always a stress to sell through the yards, and honestly one of my least favorite parts of ranching.  There is so much going on and everything is so incredibly busy, with so much on the line.  Markets change incredibly quickly and having to book our trucks months earlier, means we take what we get.  Selling via the video sale helps a lot, in my opinion.  At least not all our eggs are in one basket.  Next year we may consider forward contracting, where we will sell them to the 'highest bidder' as early as July or August (but still deliver in October.) 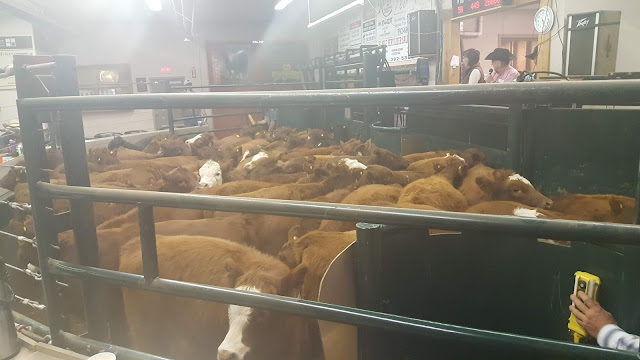 In the Sale Ring

We raced home to round up again (they hadn't gone far from the ranch as they are just getting over missing their calves.)  We pregnancy checked everyone (or rather, our vet did) and overall did really well.  The combined ranches did well.....but the Hatch herd seemed to take most of the hit, despite having lower percentage of the animals.  Ah, it's how the cookie crumbles, right?  All good.  Many of the cows that were open (without calf) or late were quite old anyhow, and in general the herd caught up well after last years painfully long and drawn out season. 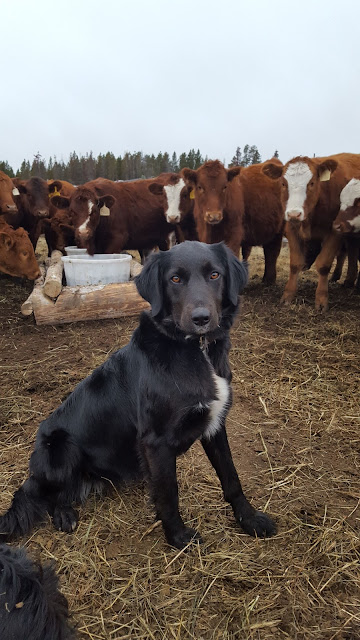 Brady posing in front of our gentle group of heifer calves.  These are the 'top end' that we will choose our replacements from.

Despite being meant to be a tough rancher, I do feel a bit bad for our old girls that have to go.  I even coaxed one of our good friends into taking one of my old favorite cows for "one more year".  She is actually one of the first calves from the cow Eli and I got for our wedding!  "Tea" is pregnant and will calve early but is getting hip shot and just wouldn't be able to handle another winter with the main herd.  But 'babied' at Ken's she will do just fine.  I promised I would buy the calf back in the fall (fingers crossed for another heifer, we've kept every one out of that line).

So out the cows go again.  They are split into a couple of different herds and moved back to the hay meadows where they will stay until a bit of snow forces them into longer grass (they prefer browsing in the stubble for as long as possible, getting any new shoots).  As always, we have plenty of fall forage, however, it is sure more 'burnt out' than usual this year, so the feed value may not be as good as it could be.  Anyhow, the cows are over missing their babies and loving the great weather.  Sure nice to see them in such great shape and feeling so good.  I don't care who you are, or how gruff a face you generally put on.....watching a cow run and buck and kick, just for the fun of it, is hysterically funny and you can't help but grin and shake your head.  I'm grinning now just thinking about it.  It just looks totally goofy and out of place, and sure shows how good they are feeling.  Nice. 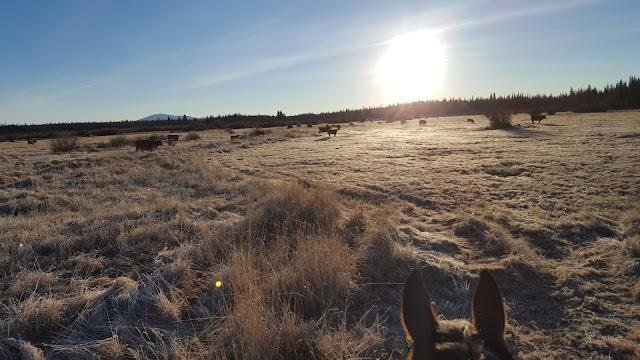 The sad part about this whole scene is that it also signals the end of our riding season, or darn close to it.  And I don't like that one bit!  Of course we will move them to better forage over the fall, or to different meadows to feed out hay over the winter, but that hardly counts compared to our long days in the saddle from May to October.  Dang.  But.....something to look forward to for next year already I guess. 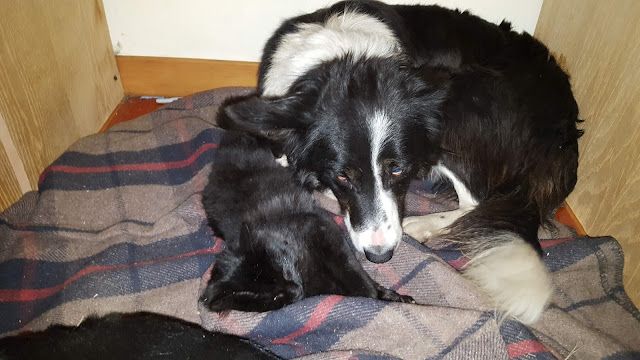 "Keep an eye on her, Zip!"
This is what bored cow dogs do in the off season.

Now back at the ranch, we are settling in to fall projects and homeschooling again.  We are also planning a trip this year, and it looks like Disneyland is top of the list!  I can't say I'm super excited about it, but the kids sure are!  Beings as we are down there anyhow (and won't manage to stay in a city for more than a few days, I'm sure) we are thinking of renting a vehicle and doing some touring of California.....  does anyone have recommendations?  I truly would appreciate any tips.

All the best!
Punky 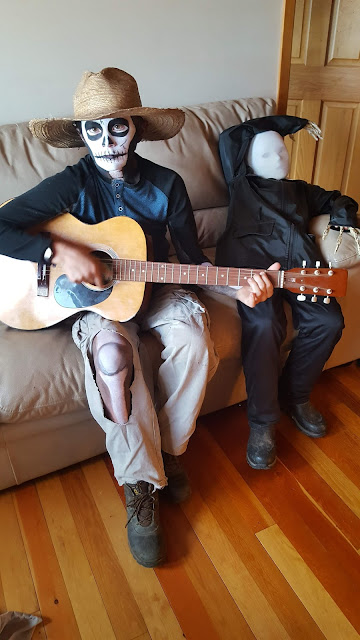