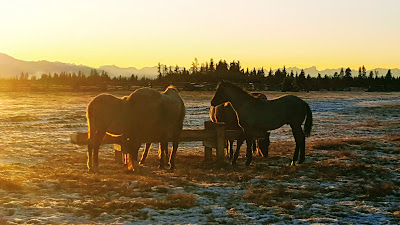 Newly weaned young'uns learning to eat grain with Daddy Red.  Out of five babies, four are roans.  They are from a light pink color to a dark brown/black.  Beautiful....we have a pretty flashy string these days! 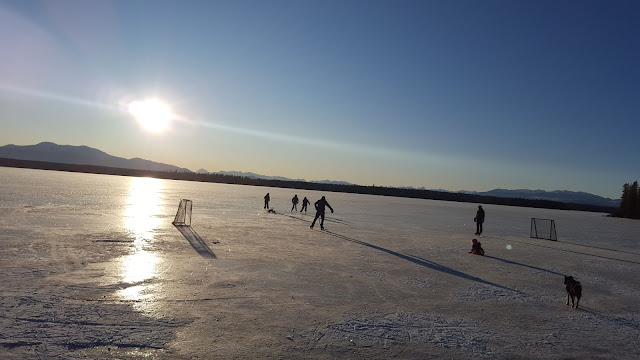 This was a beautiful day on Anahim Lake, skating with friends.  Kappan Mountain is on the left and the Little Rainbows on the far right. 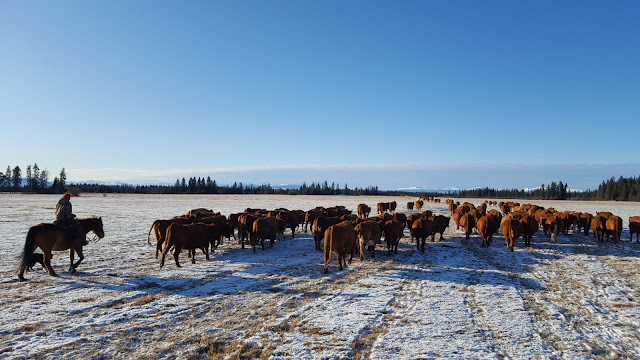 Jackson and his trust dog Rawsy, helping move cows to the bottom end of the Five Mile meadow.  Cold but beautiful. 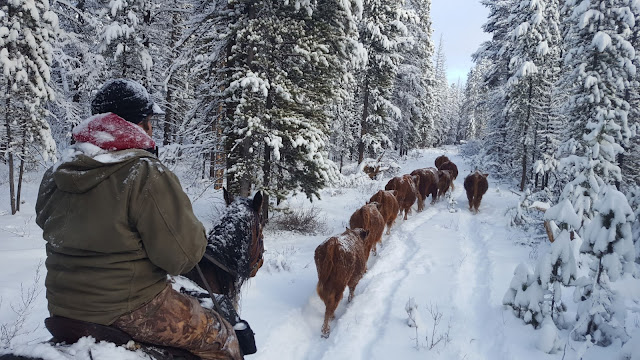 Yep, that's the boss on a horse.  Feast your eyes people, its a rare occasion (unless he is guiding a hunt).
There were a couple of bulls spotted in a meadow a couple hours ride from home.  I had tried to get them earlier in the fall, but the ground was frozen just enough to make the iced up mud horrible on horse legs and beyond the first sighting (I was walking my horse and spotted them from 100 yards away), I never saw them again.  The second time I went after them, I came upon a few strays first....3 pair and an orphaned calf.  I have no idea where they had been, but I'm pretty sure they were stuck in some nasty little swamp until the ground froze enough that they could get out to where I found them.  They were healthy enough, but certainly no one was packing any extra meat on their bones.  I tried very hard and carefully to get them to cross a frozen creek (that I had ridden my horse across) and head for home.  But oh no!  Despite the excellent entrance, and solid ice with a good skiff of snow for traction, they were convinced it was much too dangerous and would not go.  At one point I finally had them all quietly tippy toeing across, proud as you like.  Then my lead cow stopped to sniff at my horse track about 3/4 of the way across (it's not far, I could easily throw a rock across it!), slipped a foot just the slightest bit and that was it.  Fully justified in their worry now, they all whipped around and panicked their way BACK to the wrong side of the creek.  Sigh.  Seriously.  I got them re-rounded and standing in place again, all stubbornly staring across the creek and then left them to keeping looking for my wayward bulls.  I eventually came upon them in a good spot and they acted calm enough that I was feeling pretty confident we were just going to walk on out of there, as we should.  The best laid plans, right?  The terrain in that area is tough, the trees are either so close together that you can hardly push through, or there is so much windfall you end up spending huge amount of time going around it, or trying too.  Anyhow, they got a bit goofy and quick, which is not necessarily a problem if they are heading in the right direction.  Which they were not.  They ended up splitting up, forcing me to follow just one around in huge circles, trying to find the other.... It eventually got dark enough I was just hoping I'd get them to where the cows were.  But even that was not to be, much to my annoyance.   I can tell you that was a long cold ride home in the dark for the fun of it.   We even walked the whole way as I wanted Schmoose to dry out (from the snow and sweating) as much as possible.  It was -14C when I got home, so I even dug out a horse blanket because of course her outer coat was still wet.  I'm sure the other horses made fun of her for it, but I'm equally sure she appreciated it!  Brought back memories of her stable days!  Haha.....how far she has come.
Anyhow....the next day, Eli ended up pushing and cutting his way through the huge amount of windfall along an old road to where the cows still stubbornly waited.  They were sure happy to see the bale of hay and salt he brought them!  A couple of days later, Eli, mum and myself all suited up and headed out again.  This time we took the cows with us up to the bulls and very quietly held them until the bulls were happy to be part of the 'herd'.  And then everyone walked back home (and across the frozen creek which had a bit more snow by then) as easy as you please.  Eli has already warned me that he will not forget how he had to come help me 'cowgirl', since I couldn't get it done myself, and how easy it all went with his expertise along. (insert eye roll here...) 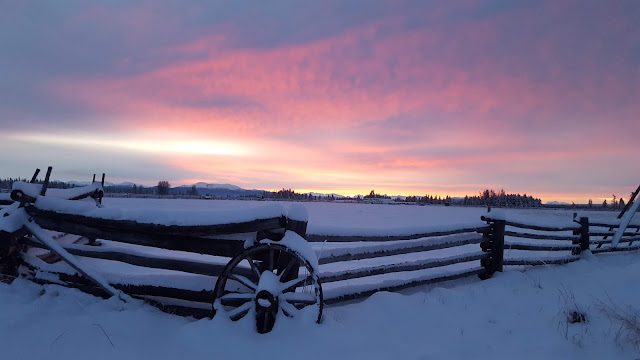 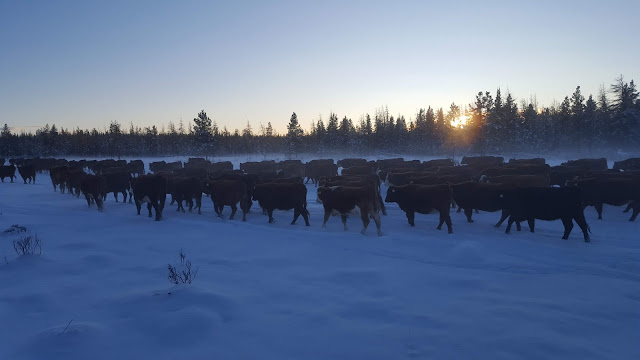 Moving some of the younger cows to new feed.  I don't set out with intentions to ride in the dark, but the dang days are so short!!  Everything is looking really good.  There is plenty of feed for them and the mineral tubs we put out ensure they are getting everything they need.  As long as the weather stays as it is (not terribly cold and not too much snow), they will be quite happy.  Which is a good feeling considering how much hay we've already had to buy this year! 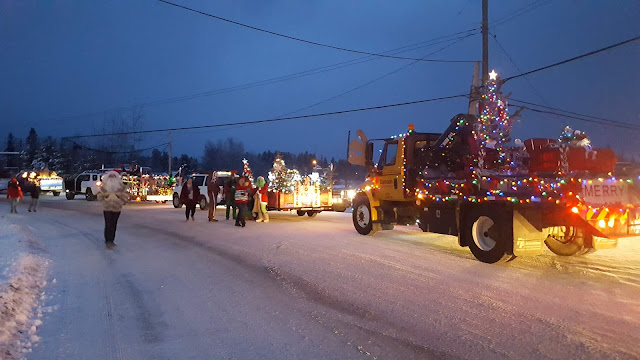 The Christmas Parade in our little town.  Lots of fun, and well attended! 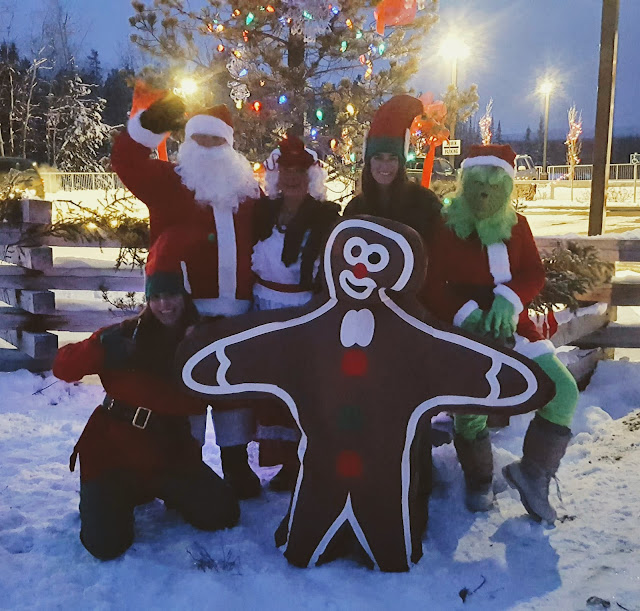 Mr and Mrs Claus, some helpful elves and Gingy!  Oh, and the Grinch, who may have been the cause of a few pretty spooked kids, but nothing a candy cane couldn't fix! 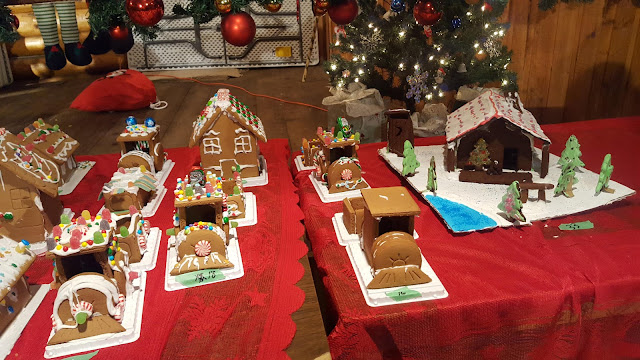 The gingerbread contest.  Ours (on the right) was based on our hunting cabin.  Seemed like a good idea to do it all from scratch...but next time I think we will start a few days prior! 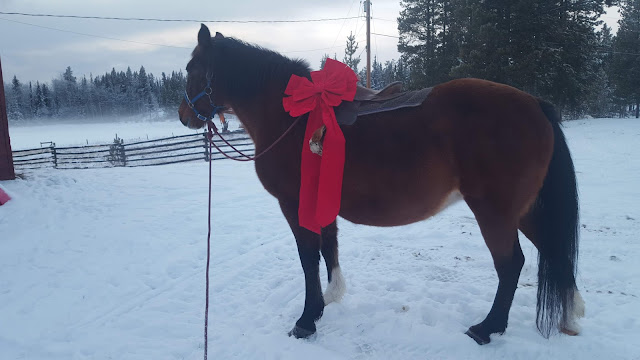 Every old horse dreams of having a little girl of their very own, right? 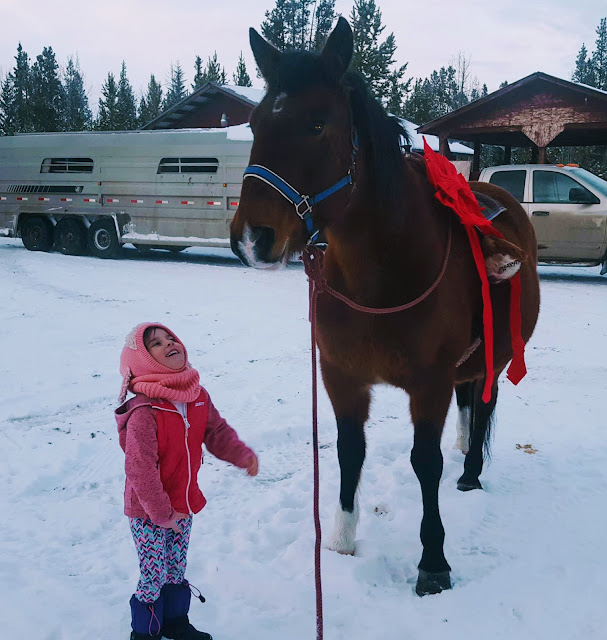 Merriest of the Christmas Season to you all!
Cheers,
Punky